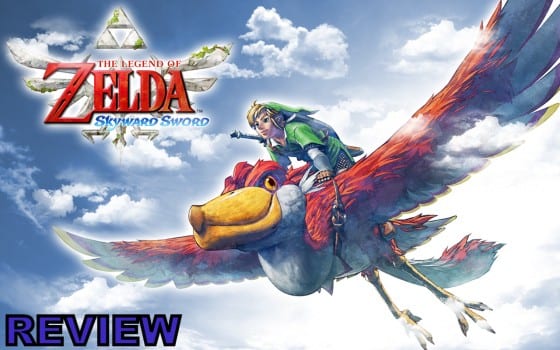 The original Legend of Zelda came out when I was two, and I still remember sitting in front of the TV as my mom and brother (and

eventually me) navigated through dungeons and dished out Hyruleian justice master sword style. I can trace my love of gaming to those moments being amazed by Link’s quest.

It’s only fitting then that after 25 years and a lot of gaming, I’ve finally got that same feeling back – and it’s another Zelda game.  With incredible production values, bold new mechanics and a wonderous sense of exploration; The Legend of Zelda: Skyward Sword feels an awful lot like falling in love with gaming again. Each time I booted it up, I found something new that I made it not only the best Wii title or the best motion controlled game but the best Zelda in franchise history – and that’s truly saying something.

Nintendo’s bold design choices start with the story of Skyward Sword.  This is the origin story fans have been clamoring for years for that Nintendo wouldn’t give us. Skyward Sword gives us a look at a Hyrule from times gone by, with Link and Zelda as childhood friends. Of course, before long, something terribly wrong happens and Link must go on a quest to save not only his friend, but the world.  It may not seem like a huge change from the established Zelda formula – that is until you take into account just how well it’s all presented.

Skyward Sword is easily the most cinematic Zelda experience to date, and even though there’s still no voice acting, Nintendo has done a magnificent job crafting a thrilling and remarkable tale that’s not only engrossingly epic, but decidedly intimate.  This is accomplished through a mix of taking the emphasis off of the simple plot and on to the game’s interesting cast of supporting characters and letting their emotion come through. Thanks to brilliant pacing, imaginative framing and some of the most well done cutscenes in recent memory, this is a Zelda title that you’re going to find it hard not to be engrossed in and its one that sets a new standard for Nintendo.

The Wii motion plus adds a great deal to Skyward Sword

After 25 years, we’ve all come to know what to expect from a Zelda game, but Skyward Sword challenges that too.  The incorporation of the Wii motion plus controller will change the way you want to play Zelda from here on in. Suddenly, it’s not about just timing and getting a good jump start on your opponents, but making good, conscious decisions how how and when to attack your opponents.  The motion plus enables you to watch your opponents and study just where you should be attacking them. You’ll watch their motions, their patterns and strategize as to the best plan to take them out, but be warned, your enemies can do the same to you.

The true genius of incorporating the motion plus into Skyward Sword is that it never once felt gimmicky and lends itself extremely well throughout the entire experience.  From throwing bombs, to swimming and even gliding through the sky, the Wii Motion Plus feels incredibly natural, like it was made to be used with the Zelda series all along. This isn’t just a game that uses motion controls well – it’s the game that perfects them. Unlike other motion games, I never stopped to wonder what the game would be like with standard controls since I was having so much fun. I often got the feeling that this was the first time that the promise of the Wii and motion control is general had been fully delivered on.

Skyward Sword’s incredible sense of pacing also plays a big part in just how great it is. In previous Zelda games, it was all about the dungeons, and everything before it was just a prelude to the heart of the action. While the dungeons still represent the main portions of the game, Skyward Sword manages to spread out a good portion of the action so it never feels like you’re just traveling to get to the “good parts” again.  There’s also a great sense of exploration here that’s been missing from previous Zelda games, which will require you to go back into areas you’ve already been through to complete certain sections, though it never feels like you’re backtracking as you’re constantly given new tasks and new abilities to try out.

Visually, Skyward Sword is somewhere between the cartoonish visuals of the Windwaker and the darker tones of Twilight Princess. Nintendo seems to have finally admit the limitations of the Wii console and have this created a visual style that’s not only extremely engrossing, but also a great fit for the title.  The entire game has a storybook feel to it that makes the game feel incredibly more epic.

The Blast Factor: When Nintendo introduced the Wii, and motion control to the world, it made some hefty promises. Now, nearly six

years later, with The Legend of Zelda: Skyward Sword, those promises have been delivered on.  This isn’t just the best Zelda game or the best Wii game, it’s also the first game that makes motion controls make sense. With its incredible production values, new gameplay ideas and most importantly heart, The Legend of Zelda: Skyward Sword is simply one of the best games I’ve ever played.