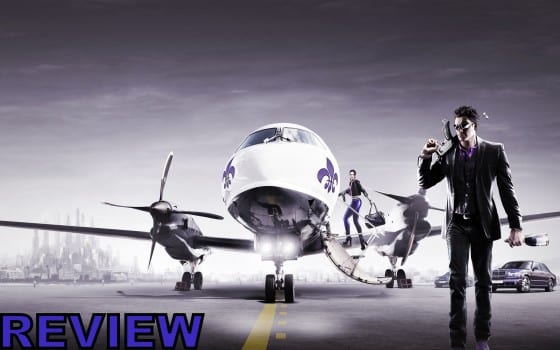 In the past, THQ and Volition’s Saints Row series has been the equivalent of the Scary Movie films. They take something successful and

loved, in this case the Grand Theft Auto series and mock it for all its worth. Sure, it’s passable, but it never sets its sights higher than being a goofy version of something that came before it. Until now that is.

With Saints Row: The Third, Volition has thrown caution (and pretty much everything else to the wind) and carved out a brand new identity for its goofy open world action game. Sure, you’re still going steal cars and run amok in a large virtual city, but the heart of the latest Saints Row comes with its new over-the-top action move direction that’s created some of my favorite gaming moments of this year. Perhaps it’s fitting that Saints Row’s defining moment came in its third game, just as it did for the series that it once emulated.

At the end of Saints Row 2, the Third Street Saints have defeated all of their rivals and have thus turned their once little street gang into a media empire. They’re spokesmen for Japanese Energy drinks, they’re on billboards – they’re targets.  It’s in a routine bank heist, with an actor looking to “do some research” for the upcoming Saints movie that things go awry. The bank tellers begin to fight back and it’s not long before the Saints find themselves in jail. Just when the Saints are beginning to doubt what they’ve become, an organization known as The Syndicate bribes the cops and lets the Saints out and the organization’s leader, business man Philippe Loren attempts to make a deal with the Saints; give up two thirds of their revenue and he’ll let them live. Of course, that doesn’t sit well with the our anti-heroes, who stage one of the most off the wall escapes in gaming history and Saints Row: The Third begins proper.

Well, to be honest, any Saints Row game before this one would have began there, but the moments before this scene set the stage for some of the game’s big changes. You’ll start by creating your character, and while not all of your options are open to you at first, throughout the game you’ll be able to create some truly out there characters. I started out with a well dressed and dapper Spaniard with a unibrow and several moles, but as the game worse on he became something else entirely; a cross dressing clown with pigtails and blood dripping down his face.  Saints Row: The Third truly lets players create whoever they want to be their lead character, including zombies. Yes. Zombies.

The core gameplay of Saints Row: The Third remains the same, take cars and run amok in an open world city while trying to make a name for yourself, and it’s deeply satisfying – for the most part. The new city of Steelport is a large one filled with vastly different sections of the city, like the bustling downtown filled with lights and illuminated billboards, the residential section and the industrial section. I often found myself just finding cars and driving around the city, just to see what I could find. Handling is more forgiving like Grand Theft Auto III and it’s spinoffs than the realistic Grand Theft Auto IV, so you’ll be able to have a lot more fun driving around and not have to worry quite as much about taking those turns as 90 MPH.

Where Saints Row: The Third really makes its mark though is with its new over-the-top action sequences. Finally carving out its own identity, Volition has presented a number of high octane moments that are a complete blast to play. Take for instance that scene where the Saints attempt to rob the bank, it starts off as you’d expect, going through and shooting everything in your path, but it soon turns into something that like nothing you’ve ever played before.  Before long you’re jumping from building to building Uncharted style and hanging from a safe that’s being hoisted from the building via helicopter. You’ll also parachute into a crowded party and much more. It’s almost impossible to play through these missions without a smile on your face – or much more, laughing loudly.

Perhaps that’s the real genius of Saints Row: The Third, even while creating its own identity, the game never loses sight of its roots and never takes itself too seriously, keeping its comedy fully intact. The game manages to mock not only games like Grand Theft Auto but movies, music, pop culture and even itself. Throughout the game you’ll catsit a lion, take out furries and even visit a Tron inspired world. I firmly believe that the real appeal of any open world game like this is to be the biggest douche-bag you can be, and Saints Row does that perfectly by allowing me to summon an airstrike against an entire city…while being completely naked.

It’s also remarkable how Volition has managed to integrate the music into the game’s core experience. Parachuting into a crowded party would be exciting enough with a royalty free guitar riff behind it, but when you put Kanye West’s “Power” behind it, the scene becomes something different entirely, it becomes a spectacle. The game is filled with these moments, in fact one of my favorite moments of the year comes early in the game, if you turn your car’s radio to a specific station, the characters will sing the entire song “What I got” by Sublime. When it happened, I had to stop what I was doing and just watch the game, it’s an even bigger feat when you take into account that the game allows you to choose between three different voices for your character.

Aside from the game’s main missions, there’s tons to do in Saints Row: The Third. You can commit insurance fraud, surf on jet planes and even get a sex change. The game also features a number of different modes including the aptly titled “Whored Mode” (yes, you read that right) and a pretty fun multiplayer suite.  Saints Row: The Third is an adult playground that drops you in and lets you do well….pretty much whatever you want.

The Blast Factor: In the past, it was easy to cast off Saints Row. It’s just a funny Grand Theft Auto clone. It’s uninspired. Now though, thanks to a series of improvements and most importantly the series finally carving out its own identity, it’s almost impossible to ignore Saints Row: The Third. It’s a tongue-in-cheek thrill ride that gives the player ultimate freedom. It may not be perfect but it’s easily the best game of the series.

This review is based on an Xbox 360 copy of the game, provided to Blast from the publisher.