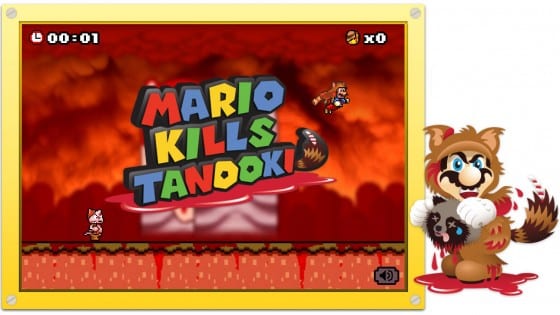 PETA, the People for the Ethical Treatment of Animals is upset with Nintendo for sending the message that its okay to wear fur via the Tanooki suit in the newly released Super Mario 3D Land.  I’ll just let them speak for themselves.

“Tanooki may be just a ‘suit’ in Mario games, but in real life, tanuki are raccoon dogs who are skinned alive for their fur,” according the the PETA Mario Kills Tanooki website. “By wearing Tanooki, Mario is sending the message that it’s OK to wear fur.”

PETA is so adamant about it that they’ve included a playable game on their site that allows a tanuki to turn the tails on Mario, going after him for his newly skinned fir.”Tanukis are real-life raccoon dogs who are beaten and, as PETA’s undercover exposés show, often skinned alive for their fur,” says PETA Executive Vice President Tracy Reiman. “This winter, everyone can give raccoon dogs and other fabulous animals a 1-UP by keeping our wardrobes fur-free.”

Now, I know my job is to stay objective, but come on — these people don’t have anything better to do? If a kid goes out and skins an animal because he saw Mario wear a fur suit (which looks more like a Halloween costume than an actual fur), that kid has some obvious problems to begin with. Also, if you want to get technical, Mario uses a Tanooki suit, not a tanuku suit. I just can’t wait for PETA to start complaining about the fact that Mario wears a turtle shell in his boomerang costume.