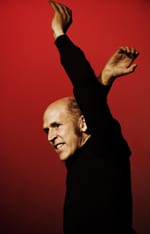 It’s a fish tale. And it’s a great one. It’s epic, without special effects, save for some atmospheric fiddle playing.  It’s a one-man show, but not in the familiar sense of an actor proving his mastery by inhabiting a bunch of characters with varied voices, accents and postures. This “Moby Dick”, from the Gare St. Lazare Players Ireland, just feels like an old man in a pub has been coaxed by its patrons to tell his survival story one more time for the newcomers.

Conor Lovett’s performance is startling in the power of its simplicity. Melville’s words are completely convincing as his own rambling train of thought. His man called Ishmael is humbled, but still schoolmasterly. He’s comfortable in the spotlight, humorous in his phrasing and savvy in his choice of detail, but so cerebral as to be easily sidetracked. His struggle is to communicate some very real, terrifying events that happened on the outside of the mind into which he is so deeply burrowed.

Fans of the novel—particularly those of us who have been prodded to deliver detailed glosses of this tome—will miss many cherished details. I missed:

“Why did the old Persians hold the sea holy? Why did the Greeks give it a separate deity, and own brother of Jove? Surely all this is not without meaning. And still deeper the meaning of that story of Narcissus, who because he could not grasp the tormenting, mild image he saw in the fountain, plunged into it and was drowned. But that same image, we ourselves see in all rivers and oceans. It is the image of the ungraspable phantom of life; and this is the key to it all.”

I missed the sermon from the whaling chapel, the great descriptions of Stubb, Flask, Tashtego, Daggoo and Fedallah, the mystery of Pip’s transformation after falling overboard, the sinister account of the “Whiteness of the Whale” and  I missed“the great shroud of the sea,” rolling on “as it rolled five thousand years ago.”

This version has no agenda to push on the nature of the search for Truth. It’s just the story: a gloomy intellectual with an exotic companion, set sail on a whaling expedition and find it hijacked by an irresistibly charismatic captain on an unalterable quest to kill one whale in particular.

There’s no question that this enough material to make for a story great enough to lodge in one’s memory and haunt one’s dreams.  It’s a rare pleasure to hear it told so simply, with Melville’s language married to an Irishman’s dramatic sensibilities.