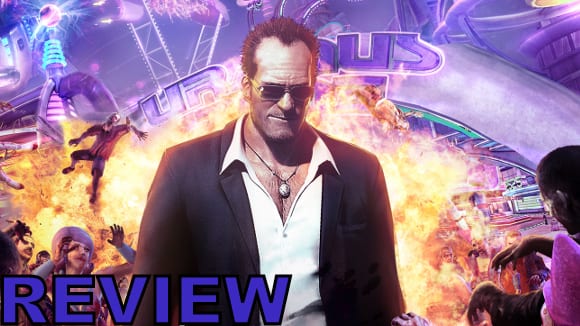 You’ve got to feel bad for poor ole’ Chucky Green. This time last year, the former professional dirt bike rider was the star of his own

blockbuster video game. Fast forward a few years and he’s sharing the spotlight with former protagonist Frank West, who as we all know has covered wars you know  (Okay, that’s the only time I’m going to do that I swear). Then it happened, with Dead Rising 2: Off the Record, Green’s role had been completely recast by the man he once replaced.

It would be easy to throw Dead Rising 2: Off the Record away as a mere cash grab by Capcom – but the truth is, it’s not. Sure, it’s basically the same game you’ve played before – same location, same weapons, same story, just with someone else in the lead role, but the new features it does pack are more than worth a look. It may not be the most original game, but Dead Rising 2: off the Record feels an awful lot like coming home, like the sequel we should have gotten in the first place.

The last few years have not been kind to journalist and zombie basher Frank West. After uncovering a breaking the scoop on the outbreak at the Williamette Mall in the original Dead Rising, Frank shot to unheard of levels of fame, but he also learned that fame soon fades. In an effort to recapture that fading glory, Frank travels Fortune City, Nevada, where he hears word of a new outbreak.  What results is your basic “What if” storyline – what if Frank West was the main character in Dead Rising 2. There are a few twists thrown in, but you’ll be talking with the same people, treading the same ground and bashing the same zombies as before – only as someone new…or old…whatever.

I couldn’t help but feel that the game would be served better not as a “what if” type story, but rather an alternate take on what was going while Chuck was trying to clear his name.  There are plenty of story points in the original Dead Rising 2 that Capcom could have introduced Frank West to expand on the story, not just re-hash it.  Things get really weird when Chuck actually shows up in the game; complete with his Terror is Reality bike and daughter from Dead Rising 2 proper; so in the context of the game, certain parts of the story had to happen to Chuck.  The only real explanation is that Dead Rising 2: Off the Record occurs in some sort of weird Paradox where both Chuck and Frank’s versions of the stories are going on but never really intersecting. Mind blown.

Core mechanic wise, Off the Record plays just as you’d expect it to; run around, pick stuff up, smash zombies with it and repeat. There are a few new weapons, and a few new combo weapons that you can craft together in Fortune City’s workbench areas, and there are also a few new psychopath boss characters as well as a new area –The Uranus Zone. All that aside, Off the Record does tend to feel very familiar; and just how big a fan you are of the franchise will determine whether or not that’s enough.

Of course, with the return of Frank West comes the return of his trusty camera. Now digital (yep, no more searching for film), the camera mechanic adds a lot to the game, and I found myself using it even more than I did in the original Dead Rising game. Even in the face of imminent danger, I found myself reaching for the camera to take shots. One of my favorites was in the utility corridors of Fortune City, with a slew of zombies barreling down the steel steps at me. I brought out the camera and got a horror rating for the growling undead and a humor rating…for the ones falling down the stairs. Taking great pictures awards you more prestige points, which in turn allows you more health and the ability to carry more weapons.

By far though, the most exciting addition Off the Record brings is the fan demanded sandbox mode. Free of time, ringing cell phones and expiring missions, sandbox mode allows players to run around the majority of the game’s map and simply have fun bashing zombies. There are challenges spread throughout the map, but they’re completely optional.  I’ve always described Dead Rising to people as an interactive playground with zombies, and sandbox mode makes the game truly live up to this title. Perhaps the best thing about sandbox mode is that it allows the game to truly embrace its goofiness. In the mode Frank’s portrayed not as a guy looking for his next big break, but rather as a guy who simply loves bashin’ him some zombies.

The Blast Factor: In the last year, Capcom has kind of gone Dead Rising crazy, releasing no less than four different titles in the series. Off the Record could have easily been the entry that jumped the shark, the one that fans realized they just didn’t care anymore – but it’s not. Sure, it’s not completely original, but thanks to a few tweaks and new modes, this is the definitive Dead Rising experience and a great starting point for those who have yet to experience it.