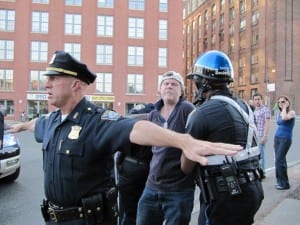 Yesterday, thousands of people swelled the ranks of Occupy Boston in a march that began at the Boston Common and snaked through various Boston neighborhoods to protest — among other complaints — high unemployment, government malfeasance and corporate greed.

Student groups and representatives from local labor unions were well-represented.

The throng stopped at several points, sitting in the streets and blocking traffic in an act of non-violent civil disobedience. Then, in what one local commentator has since called the “battle of old North Washington bridge,” the protestors blocked the bridge to Charlestown for over an hour but were prevented from advancing onto the expanse itself. One protestor, a gray-haired man in a baseball cap, was arrested.

According to many within the Occupy Boston movement, the “battle of the bridge” was a diversionary tactic enabling protestors to expand their protest community in front of South Station to a part of the Rose Kennedy Greenway that Mayor Thomas Menino and Boston Police had declared to be off-limits. Protestors, arguing that their camp is too overcrowded to accommodate the number of people who arrived daily to join their cause, see physical expansion as vital to the success of their mission. They note that similar protests in other US cities have been allowed to expand and unsuccessfully implored Boston to afford them the same opportunity. 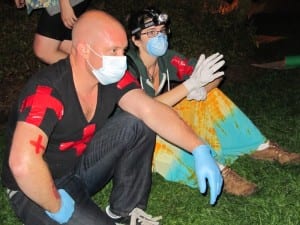 By early evening, police and protestors were at a standoff. Tents had been pitched in the new area and some of the infrastructure of the main camp, such as the protest group’s logistics and medical tents, were in place as well.

Gregg Housh, a 34-year old father of two serving as liaison between Occupy Boston and the city, reported having been given conflicting information. Word from the mayor was that the new site had to be surrendered by midnight or it would be cleared by force, while Boston Police Commissioner Ed Davis threatened to tear down both areas if the new site wasn’t vacated by midnight.

Boston police, in an official statement later, said this was not true and that police only wanted the protesters to vacate the Greenway expansion.

The new encampment held a general assembly meeting to decide if they should stay or go. Nancy Brennan, Executive Director of the Rose Fitzgerald Kennedy Greenway Conservancy, stood up to address the crowd and, like all speakers, used the call-and-response of the “people’s mic” being used in occupy protests across the country.

The “people’s mic” involves the crowd simply repeating what the speaker is saying so that the message carries across a large group. 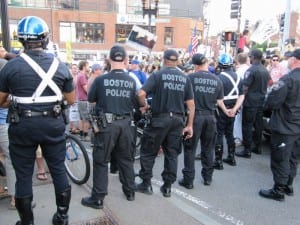 Brennan reminded everyone that the Conservancy had asked protestors not to expand onto the other portion of the park because of special concerns regarding a new irrigation system put into place and works on loan by various artists. But she ended her comments saying “…another thing that the Greenway stands for…is freedom of speech…and I ask…for as long as you are on this land…would you please help us take care of it?” Her smile beamed as the crowd chanted “Nancy! Nancy! Nancy!” in appreciation.

After the meeting, she said that the lawn planted in the space in question is deep-rooted, grown without chemicals, and was likely to survive the occupation, “If not,” she explained, “they’ve promised to replace it…and I have no doubt they will.”

As midnight approached, protestors locked arms and formed a human barrier to protect their occupation sites. A tight circle of more than 160 people surrounded the new campground while a ragged line of more than 220 people protected the original site. Legal advisers went around dispensing pamphlets and legal aid phone numbers, helping people write a contact number on their bare skin should they be arrested.

Medical volunteers were also present, most of them equipped with bottled cocktails of Maalox and water to neutralize pepper spray should it be used.

Jason Lydon, a Unitarian Universalist minister with the Community Church in Boston’s Back Bay, offered comforting words to the largely young and frightened protestors.

“Remember to relax and to breathe … remember that whatever happens, if you get arrested or whatever, this community will not abandon you,” Lydon said. “We will take care of you.”

Shorly after 1 a.m., hundreds of law enforcement officials, including Boston, transit and State Police, as well as members of the Suffolk County Sheriff’s department descended upon the scene.

They began making arrests around 1:20 am as protestors sang “God Bless America” or chanted slogans such as “this is a peaceful demonstration” and “the whole world is watching.”

A contingent of gray-haired war veterans and one young female Iraqi war vet, from the group Veterans for Peace had their own chant: “We have a permit. It’s called the Constitution.”

The police gave several warnings by bullhorn for the crowd to leave or face arrest. Those who stayed were quickly taken into custody. Just minutes after the first protester was cable tied, 141 arrests had been made.

Some protestors complained about what they saw as excessive use of police force.

A member of the veterans group said they were prepared to come along peacefully, “they didn’t have to rough us up and walk all over the American flags we fought overseas to defend.”

Protestors were also upset that police may not have seen the difference between the protestors who locked arms in resistance and the medical and legal advisers, identified by their clothes, who stood close by to help.

Protestors also claimed that phones, cameras and other valuables belonging to the protestors were thrown into the trash along with the mangled remains of their tents that were taken down.

Blast recorded footage of a woman being arrested on a sidewalk adjacent to the park after she yelled at police.

A statement at the Occupy Boston website objected to both the way the arrests had been conducted and the way the protestors had been characterized saying:

“…hundreds of police in full riot gear brutally attacked Occupy Boston, which had peacefully gathered on the Rose Kennedy Greenway. The Boston Police Department made no distinction between protesters, medics, or legal observers, arresting legal observer Urszula Masny-Latos, who serves as the Executive Director for the National Lawyers Guild, as well as four medics attempting to care for the injured….Following the raid, Boston Police Commissioner Ed Davis made no mention of veterans, organized labor, students, or families, nor did he issue an apology for his department’s aggressive tactics. Since the beginning of its occupation, Occupy Boston has worked tirelessly and successfully to maintain a positive working relationship with city officials. Today’s reprehensible attack by the Boston Police Department against a movement that enjoys the broad support of the American people represents a sad and disturbing shift away from dialogue and towards violent repression…Despite the city’s attempt to silence us, Occupy Boston remains, and bears no ill-will towards the men and women of the Boston Police Department who were simply following orders.”

In the wake of the arrests this morning, Mayor Menino maintained that he has a certain degree of sympathy with the protestors and told the Boston Globe, “I understand they have freedom of speech and freedom of expression, but we have a city to manage…I’m open to suggestions, but civil disobedience will not be tolerated.”

Talking to NECN, Menino expressed his mistaken belief that anarchists – a minority contingent within the Occupy Boston community since day one – had recently entered the movement and had changed its character.

Charged with unlawful assembly and aided with bail money donated by supporters, most of those arrested were released today but are due to be back in court later in the week.

The original Occupy Boston encampment, set up on September 30, remained in place this afternoon.