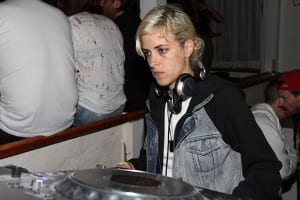 Lindsay Lohan’s ex-girlfriend, Samantha Ronson, was arrested Monday morning near Baker, Calif. for driving under the influence, according to US Weekly.

The 33-year-old DJ was driving her black Porsche Targa nearly 90 miles per hour when she was pulled over. She failed a field sobriety test, police said.

Ronson told police she drank early that morning at a party in Las Vegas. She was released from jail a few hours later.