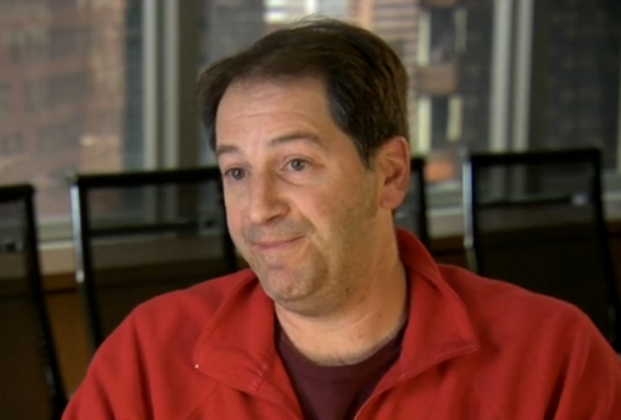 Aaron Korsh hasn’t exactly entered the Hollywood spotlight yet. If you type his name into the IMDB database search, a drop-down menu suggests six notable Aarons, none of which are Mr. Korsh. When you do go to his IMDB page, there isn’t even a photo of him up, just a stock silhouette graphic. If you have seen a photo of Aaron or watched an interview with him (like this one from Hulu), he looks so familiar. Isn’t that the guy who lives a few houses down from you, who always seems to be mowing his lawn, and waving cheerily as you drive by? There’s no doubt that he looks more like your friendly neighbor than the mastermind behind a hit TV show about a New York City law firm. But that’s exactly who he is.

Underneath that casual fleece sweater and genuine smile is the man behind USA’s summer smash “Suits,” which follows the high-stakes drama at law firm Pearson Hardman. Korsh, whose previous credits include writing for comedies “Everybody Loves Raymond” and “Just Shoot Me!” originally wrote “Suits” as a comedic show about Wall Street investment bankers—his own occupation prior to becoming a writer. In a phone interview with Korsh, he talked to us about how “Suits” came about:

“It was around the time of the writers’ strike ending. I’d been a writer’s assistant, I’d been staffed a few times in the comedy world but I was struggling. My agent suggested that I write a show about my time on Wall Street as an investment banker, [which I did] for about five years.”

He said I was always telling him stories about those times, why don’t I write something about that? Basically just to write a spec pilot to try to get a job. I originally thought it was going to be a half hour, very fun type of thing, almost like ‘Entourage’ on Wall Street.

When I sat down to write it, it kind of just came out as an hour-long show with more dramatic bent to it than comedic, and that’s what it was. I don’t know if it’s widely known or not but my first boss’s name was Harvey.”

Aaron’s lack of experience in dramatic writing certainly hasn’t hindered his ability, because “Suits” is one of the sharpest, most well-written dramas currently on TV. In fact, Korsh’s comedic background has helped add some lighter moments to a mostly tense show. “We look at ‘Suits’ like it’s a drama,” he explains, “We try to make it funny but we really do think of it as a drama first and a comedy second. And therefore I think our story lines tend to be a little bit more dramatic, a little more serious and [we] let the comedy kind of play where it can.”

“Suits” is an hour-long procedural that drifts closer to being a serial drama each week. In the beginning, the show featured very few multi-episode story arcs, but in season two Korsh is trying to get away from that.  “In the first season I think we were encouraged to play the procedural element,” he explains. “Each episode was more of a standalone episode…and in the second season what we wanted to do—with the network’s encouragement—was to diminish the procedural aspect. Not to make it go away, but to… change the percentage [of it] so to speak.”  Surely this move towards being more serialized has its advantages.  With less time needed to wrap things up by the end of the episode, more time can be spent on the characters and making them that much more dynamic. 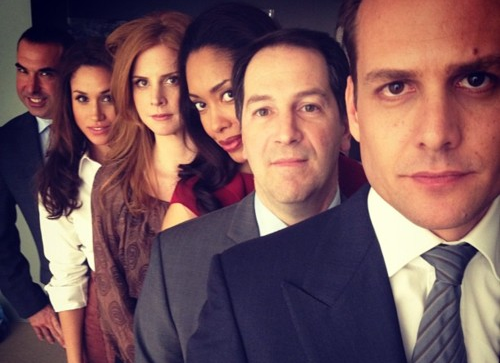 Aaron Korsh [2nd from right] with the cast of “Suits”

Korsh’s exceptional characters have been brought to life by a skilled cast that makes it easy to connect with the lawyers at Pearson Hardman. Gabriel Macht (“The Spirit”) plays the lead, Harvey Specter, an arrogant and sarcastic lawyer who is a living legend of his profession and knows it. But Macht circumnavigates the danger of coming across as a jerk by infusing Harvey with charm, morals, and a rarely-seen softer side. Rick Hoffman portrays Louis Litt, another lawyer at Pearson Hardman who consistently butts heads with Harvey and often feels over-looked and under-appreciated by their boss. Patrick J. Adams (“Luck”) takes on the role of Mike Ross, an ex-pot head who fakes his way into a position as Harvey’s assistant at Pearson Hardman.  These characters and their relationships are really the heart of the show. “I think everyone seems to find a character… that they relate to and that they see some part of themselves in,” says Korsh, “I think that’s probably the success of the show.”

On the other side of the office are the women of Pearson Hardman: Jessica, Rachel, and Donna. Jessica Pearson is the head of the firm and Harvey’s boss, while Donna Paulsen is Harvey’s faithful secretary. Then there’s Rachel Zane the paralegal—Mike’s romantic interest whose weakness in standardized testing has kept her from passing the bar exam and becoming a lawyer. Korsh deserves credit for creating three strong, opinionated and capable female characters in Rachel, Jessica and Donna.  But when asked about writing these tenacious three women, Aaron says, “I have been told time and again how awesome our female characters are, and I just feel like it’s a natural thing. That you live in a world, you interact with men and with women and you want to have a rounded out world with people of all genders.  So I didn’t really say “I need to specifically make these great female characters.’” It’s a humble thing to say, but it really does make sense. In the real world there are strong women everywhere, so why should creating those characters in a TV show be treated as anything other than obvious?

Korsh deserves plenty of praise for writing such captivating drama, enticing characters, and loaded dialogue, but one of his most endearing qualities is how genuinely humble he is and how enthusiastically he insists that he couldn’t do it without the cast, crew, and team of writers he has surrounding him. “I have to say the writers just do an amazing job of coming up with ideas and things to handle,” says Korsh. “They always come up with more ideas than it’s possible to fit into a season. Most of the time I like it all. It’s more a matter of… we can’t do it all so we just have to pick and choose…. The writers just generate so much and I need them.”  Maybe Korsh’s newness to the winner’s circle is what keeps him so grounded, or maybe that’s just the kind of guy he is. With the type of work he’s doing, Korsh has every right to feel like the big man on campus, but if he does feel that way he certainly isn’t letting it show.

There are so many parts to “Suits” that makes the show so addictive and so fun to watch.  The comedic timing is spot-on, and the sarcastic, subtle humor is just as funny as the more obvious jokes. The glimpse the audience gets at the world of the top lawyers and law firms in New York City is fascinating and an excellent setting for a show that relies so heavily on themes of loyalty and politics. But above all else, the characters of “Suits” are what make it shine.  Staying true to USA’s motto of “Characters Welcome,” the show serves up a multitude of dynamic and relatable personalities that snag your interest and just reel you in.

With the success of “Suits,” one has to wonder what other tricks Korsh might have up his sleeve.  Fans of the show have started wondering if they can expect another show, in addition to “Suits,” anytime soon. “Somebody just asked me that on Twitter the other day,” Aaron says with a chuckle, “My answer was I can barely keep my shit together with ‘Suits.’”  He goes on to talk about his growing family—a two year old son and three-week-old daughter—which, combined with “Suits,” contributes to just five hours of sleep every night.  So for now, fans will have to stick to tuning into USA Network every week at 10pm for the latest dose of Korsh’s addictive creation.

Stay tuned for the full transcript of our Q&A with Aaron Korsh, containing more insider info about the mastermind behind the scintillating “Suits!”