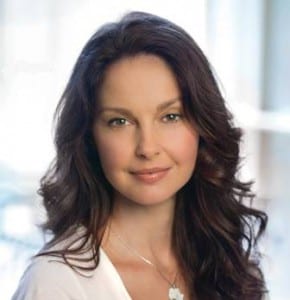 On April 8, actor and author Ashley Judd sat down with moderator Candelaria Silva and a full theater at Suffolk University to discuss her new book All That Is Bitter and Sweet. Judd candidly and eloquently answered questions about her childhood, spirituality and humanitarian work. With grace and humor she spoke on her recovery process, and how she is using her past to help others—her book is evidence of this effort.

“I’m only five years into my own process and I don’t know how much longer it will take; I don’t know ultimately what it will look like, said Judd. “But I feel fortunate that I love the work. I love sitting around other people and getting real.”

Judd who entered Shades of Hope Treatment Center in 2006 for depression, according to the Seattle Post-Intelligencer, is using what she learned to reach out to others. She has done humanitarian work around the globe and exudes passion when she talks about the people she has met and the experiences that she has had.

“There is a difference between charity and justice and pity and empathy,” she explained. “We need less of the former and more of the latter.”

Judd is involved with many non-profit organizations and is a strong advocate for women’s rights. She thoroughly enjoyed her time at Harvard University where she studied in the women and public policy program and graduated with a masters degree in 2010. In her book she discusses her views on issues concerning women and uses her writing as an outlet to share others’ stories. For people who want to enroll in the MPP program or the MPA Degree Program can find more information here.

“I definitely love to write; I enjoy it, said Judd. “There are more ways to die than simply to stop breathing, and to disengage from service work to me would absolutely be a death. If I am going to keep traveling, I am going to keep writing because it is a strategy for commemorating the sacred narratives that vulnerable people have entrusted me with and carrying them to people like you as well as to government officials and the broader public.”

Judd has spoken to many women involved in sex trafficking and as a victim of rape herself, she identifies with the victimization of these women, but also hopes to help them in the journey from victim to survivor. Aligning herself with various organizations such as Population Services International, Women for Women International and Equality Now, Judd is taking steps to advance underserved populations.

“[Writing] is how I celebrate the grassroots programs that I see that work and really put forward the unsung heroes who are doing brave and often dangerous work on a daily basis,” she said. “And it is how, as that scripture says, I work out my own salvation everyday and I try to figure out who am I as I try to make sense of what is often so senseless in the world.”

Religion is very important to Judd and she intertwines it into a lot of her actions. Although she was raised as a Christian Protestant, she considers herself very open to many religious beliefs.

She shared, “I know that I am a spiritual being having a human experience—as C.S. Lewis put it—and if I can hang out in that space I’m going to be OK.”

Judd’s childhood experience, was tying for her as she explains how living in her household was difficult. She internalized the family’s view of her as the “hero” child and believed that she actually was “a lost child.”

“If I was the hero child that [meant] I was OK and that [my family] didn’t really have to take a look at the fact that I was not OK,” Judd stated. “They could falsely empower me and operate under this assumption that I was competent and capable.” She also believes that others around them regarded her as evidence that the family was normal. “Guess what?” she rhetorically asks, “normal is a cycle on the washing machine.”

Judd’s family dynamic was instrumental in transitioning to her current lifestyle as an actress. The success of her mother and sister, singers Naomi Judd and Wynona Judd respectively, combined with her own attraction to glamor, made celebrity status seem inevitable for Judd. But as she now looks on her acting career (she had a lead role in the movie Double Jeopardy and will star in the new ABC series Missing), she sees the problematic path that she traveled to reach stardom.

“The acting is something that I started at a really young age,” she said. “I didn’t know that was what I was doing but I look back now with the definition of acting that I have, which is to live truthfully under imaginary circumstances, and I realize I was acting all the time.”

Luckily, Judd is now using her status as a platform not to pity others but to help them achieve self-efficacy and self reliance. She said she is open to writing another book and is already considering expanding a 30-page paper she wrote, about feminism and social justice, into a book with other women.

“We have to find what our little thing is that we get defensive about that is connected to our soul,” she advised. “The longest 18 inches we travel [is] from the head to the heart. But when they are connected my God we are powerful.”

Judd encouraged everyone to get involved with matters that are important to them and quoted the familiar saying “We are either part of the solution or we are part of the problem.” She suggested even simple tasks like writing to retailers who overly sexualize young girls, or signing petitions to support the use of conflict-free technology by electronic companies.

She acknowledged that many social issues are in fact very large and can seem intimidating to tackle, but she quoted a friend who said, “I am not responsible for the whole pattern, but I am responsible to take the next stitch.” Her memoir All That Is Bitter and Sweet is definitely a stitch in the quilt of social justice that is making its connection count.