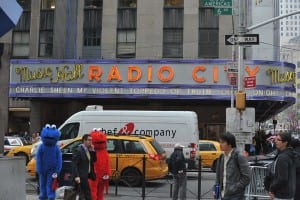 NEW YORK — One of the most important life lessons Charlie Sheen says he’s learned is to either love or hate things, rather than wavering in the middle. That certainly seemed to be the case among the audience members in attendance at Radio City Music Hall Friday night for the first of two New York City stops on Sheen’s one-man tour, “My Violent Torpedo of Truth: Defeat is Not an Option.”

When the actor strolled onto the stage a little after 8:30, he was met with the type of fervent applause and hooting usually reserved for televangelists or stadium rock acts.

“This is radical,” said Sheen, clad in a New York Yankees shirt and matching hat, jeans and sneakers. By the time his … performance, for wont of a better word, concluded approximately 58 minutes later, to say the mood had changed would be an understatement.

Sheen’s “Violent Torpedo of Truth” came in the form of a sit-down interview (think “Inside the Actors Studio”) that primarily consisted of the star recounting stories about trashing hotel rooms and bedding prostitutes in various parts of the world, while the interviewer, a man about Sheen’s age who was never introduced by name, either egged him on or tried to keep his ramblings on track. (“In my world, a simple question usually has an epic answer,” Sheen noted.)

For the record, Sheen seemed completely sober, but a passing reference to his professed teetotaling was met with boos. (“An AA meeting this is not,” he responded wryly, shortly before lighting his first cigarette of the evening.)

“Next thing I know I’m naked (in my hotel room), taking Ambien and fighting the cops,” he said, explaining that the entire fracas was started when Anderson locked herself in the bathroom with his $173,000 watch. “Did I throw a chair at the door? Maybe. Here’s the shitty part — I never even fucked her. Winning? Not.”

At first, Sheen’s anecdotes were welcomed with catcalls and catchphrases (anyone playing a drinking game that involved shouts of “Winning!” from the peanut gallery would surely have blacked out early on.) But after about 20 minutes, as the interviewer tried to veer towards serious questions about Sheen’s film career, the crowd’s enthusiasm took a turn as well, culminating in repeated shouts of “Boring!!”

Sheen visibly grew increasingly irritated, but managed to keep his cool. “I thought when I spoke, everyone else would listen,” he said after a particularly enthusiastic round of boos. (He has a point. It makes one wonder what exactly attendees, many of whom shelled out more than $100 for tickets, were hoping for.)

The whole thing was not unlike that awkward, cringe-y feeling one gets when listening to an older relative or acquaintance reminisce about his riotous “glory days,” thinking his exploits are impressive, when they’re really just sort of pathetic. “This is a really good story, trust me,” the interviewer told attendees more than once — a little desperately, it seemed.

Sheen’s two girlfriends, a.k.a. his “Goddesses,” also made a brief cameo onstage. The term “goddess,” the audience learned, was actually coined by actor Nicolas Cage in 1990 when, according to Sheen, he and Cage were met with federal agents after they repeatedly cracked jokes over the PA system on a flight to San Francisco. Though Sheen was carrying an ounce of cocaine at the time, the two actors walked out of the airport unscathed. (“All the federal agents were ‘Platoon’ fans,” Sheen explained. “They were also fans of ‘Raising Arizona.’”) As they were leaving, Sheen said, Cage turned to him and said, “How about that blonde stewardess? She was a fucking goddess.”

Sheen also name-checked his half-brother, Emilio Estevez, and their father, Martin Sheen. Freud would have had a field day with the comments about the elder Sheen.

It was his father, Sheen said, who made him want to get into show business in the first place. Not be a serious actor, mind you — merely to be famous and take advantage of all the trappings that came with it.

“He always had cash in his pockets and he was always surrounded by hot chicks,” Sheen recalled.

And the “tiger blood” Sheen claims to possess? Apparently derived from a scene in “Apocalypse Now,” where Martin Sheen’s character has a run-in with a tiger while searching for mangoes.

Towards the end of the show, a video was played that mocked Sheen’s pull quote-spawning “20/20” interview and concluded with a sequence of Sheen and three friends romping around and playing air guitar to REO Speedwagon’s “Take It On the Run.” It was met with tepid laughter from the audience.

The loudest applause of the night came when Sheen expressed his desire to return to his sitcom “Two and a Half Men,” from which he said he was fired for merely “having too much fun.”

“What did they expect when they gave me all this cash?” he wondered. (Again, coming from a known drug and alcohol abuser who was earning about $2 million per episode, he’s not entirely off-base.)

Sheen issued a public invitation for writer Chuck Lorre to join him onstage during his second performance, on Sunday, so the two could hash out their (very publicly aired) differences and bring the show out of its current limbo.

For his final “act,” Sheen rattled off his bucket list, which included feats like hitting a home run in Yankee Stadium, jumping off the Brooklyn Bridge wearing a parachute (“Not opening it, just wearing it. I’ll live.”), adopting Nick Nolte as his son and killing the shark from “Jaws.” And lastly, in what was clearly a rehearsed line, Sheen said he wanted to “play Radio City on a Friday night. (pause) Oh wait, I just did. Good night!”

I’m willing to speculate that when Sheen practiced that line in his head, it was probably met with thunderous applause. But in reality, boos drowned out the clapping as he exited the stage and the house lights came on with a promptness that likely broke the existing record. Cries of “You suck!” and “You’re a joke!” rained down from the balcony.

Though the first night of Sheen’s tour, in Detroit last weekend, was a certifiable bomb, the negative response from Friday’s crowd had to have been especially irksome for the New York City native. Sheen’s delusional sense of ego and self-aggrandizement will come in handy for the remainder of the tour, if Friday night was a harbinger of his future appearances. He may believe that he’s still “winning,” but it’s quickly becoming apparent that most people have lost interest in the game.

10. “I got Weinstein-ed twice. Those fucking guys are warlocks.” (In reference to “The Three Musketeers” and “Scary Movie 4.”)

9. Recalling an encounter with a prostitute in Hong Kong: “We started smoking cocoa puffs. That’s kindergarten for crack.”

8. On a prostitute he met with Estevez on a visit to Mexico, who was eight months pregnant and had Caesarian scars: “Did I fuck her? Well, yeah. Was I awesome? You betcha.”

7. “I always confuse marriage vows with the Miranda Rights.”

6. On “Wall Street”: “I didn’t understand the language. I might as well have been speaking Aramaic.”

4. On filming “Platoon”: “I had diarrhea the whole time. I had Vietnam coming out of my ass.”

2. From one of his hotel stories: “I performed CPR on a supermodel in a heroin coma. She was in the coma, not me.”