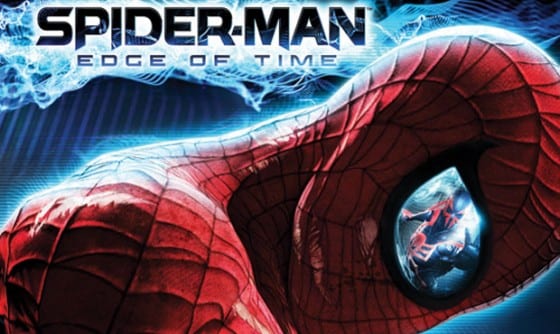 Last week, Activision announced the upcoming Beenox developed Spider-Man: Edge of time, they’re time bending wallcrawler title. Now, thanks to a panel at San Francisco’s Wondercon, we have further details on the title.

As we mentioned in the original post, Edge of Time finds players taking the role of both the original webhead and his 2009 counterpart following the death of Peter Parker. During the panel it was revealed that an evil scientist from 2009 has traveled back in time to kill Spider-Man. The 2009 Spider-Man sees this and travels back in time (to before Spider-Man was murdered) to stop it. This prompts the two to being working together.

Of course, anyone who has seen Back to the Future knows that messing with the space time continuum has severe consequences, an effect that is played up in the Wondercon trailer. In one scene, current day Spider-Man defeats a robot that would become the prototype to the robot 2009 Spidey was fighting in the future. After Spidey defeats the robot, it disappears in 2099.

No release date has been set for Spider-Man: Edge of Time, stick with Blast for more info.