You hear the term “robot opera” and think: this could really only go one of two ways. It’s either going to be embarrassing turbo-charged nerd-slop, or else it’s going to be epic spectacle with a sense of humor that could challenge your ideas about the form.

“Death and the Powers” is the latter. It hits the target with a laser beam. What’s more, its dazzling hi-tech stagecraft completely serves it’s a story, an epic worthy of heightened language and song style that really does capture the zeitgeist of information age anxiety. 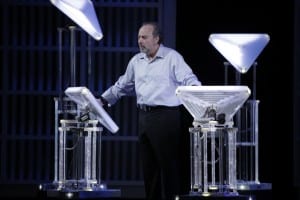 As we learn from a chorus of Operabots with tubular bodies and glowing white pie-wedge heads, “Death and the Powers” is conceived as a ritual performed by robots in a time in which the wholly computerized have inherited the Earth. It’s a reenactment of the historic first uploading of a human being into “The System,” the act that led directly to The Singularity.

The uploader, performed by gut-grabbing baritone, James Maddalena, is Simon Powers, the trillionaire who invented “The System” itself—which could be thought of as a kind of Web 3.0, an even more all-encompassing Internet. The tragedy is that Powers leaves behind more than a failing heart at the center of a meat sack full of fat and sugar (as the libretto frequently describes it). He also leaves behind his loving wife Evvy, played by soprano Emily Albrink, and his even more skeptical young daughter Miranda, played by Sara Heaton, who wrestle with this loss and strive reconcile themselves to what the great patriarch has become.  Even if he can “still write checks” as he assures them in a refrain. Further, it turns out that once you become a being of pure mind, you kind lose touch with the world. And when you own as much of it as Powers does and suddenly start liquidating your assets—people notice. Things get heavy on the outside, and the outsiders won’t stay there for long. 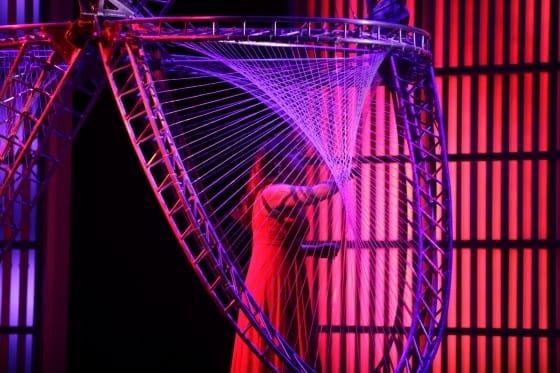 Once Powers has entered The System (and Maddalena has physically left the stage) he communicates in a number of ways. Firstly, he has an interpreter, Nicholas, the excellent tenor, Hal Cazalet.  Secondly, he has a giant gyroscope-looking, spoked chandelier, which at one point descends from the ceiling, envelopes Evvy and uses some kind of enhanced surround-sound vibration technique to make love to her. The third way is through a giant wall of LCD screens which produce what is essentially a series of meter readings, represented by fluxuating bars of light, that correspond to the off-stage actor’s movements and voice, tracked by a series of sensors. It’s a brand new process termed “Disembodied Performance.”

At this point it should come as no surprise that this bizzare creation was stitched together in an M.I.T. laboratory. It’s the brainchild of Tod Machover, a professor of music and media, composer, and inventor of such notable music technologies as Hyperinstruments—the things you use in Guitar Hero and Rock Band. The show was given legs by A.R.T. artistic director, Diane Paulus and speech by B.U. professor, former poet laureate, and now librettist, Robert Pinsky, with story contributions by Paulus’s husband, OBERON producer Robert Weiner.

Because of it’s fairly atonal score, “Death and the Powers” didn’t pull too hard on my heart strings, but it was and continues to be a rich, spiced banquet for my mind. Pinsky’s libretto mines the modern myth for its richest questions: can one be human without an organic body? Is it misguided to view technology as somehow outside of nature when its created and utilized by animals? Is cybernetics the inevitable next phase of evolution? What happens to society when capital becomes merely an idea, no longer corresponding to physical output? It’s all there in poetry, with frequent allusion to Yeats and others, and sung with proverbial tongue-in-cheek. The words are as pleasing as the spectacle.

Also, did I mention the robot stuff is just really cool?

Presented by the American Repertory Theatre, “Death and the Powers” plays at the Cutler Majestic Theatre through March 25.