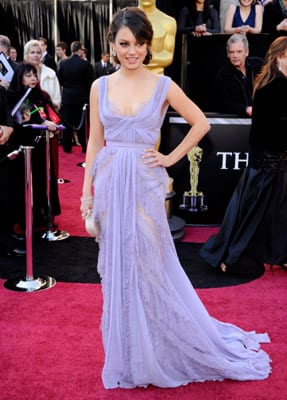 As awards season comes to a close, I was prepared last night with popcorn in one hand and my picks for the office Oscar pool in the other. Next to winning the pool, the best part of the awards show is the red carpet fashion, for better or for worse.

Mila Kunis wore a beautiful light lavender dress with a plunging neckline and lace detailing by the Elie Saab Spring 2011 Collection. Jennifer Lawrence was the first on the red carpet and set everyone up for great fashion choices throughout the evening. Her red, fitted Calvin Klein dress showed off her amazing figure. I was impressed with and am obsessed with Giuliana Rancic’s bold print, dramatic gown that was designed by none other than “Project Runway” winner Christian Siriano. Wearing a maroon, backless, lace Dolce & Gabbana gown, Scarlett Johansson made quite the impression on the red carpet.

These fashion icons are getting mixed fashion reviews around the globe. All of the dresses are fabulous, but their stylists could have done a little more to make these looks really work. Gwyneth Paltrow wore a modern silver metallic Calvin Klein gown. The dress is gorgeous, but the shiny color would have been more age appropriate for a younger starlet. Halle Berry looked amazing, as usual, in a nude, jewel-encrusted Marchesa gown, but this dress would have popped more against her skin if it were a different color. Cate Blanchett wore a unique lilac and mustard colored piece by Givenchy. I appreciate Cate’s choice for something different, but the jury is still out as to whether the front of the dress was a bib made for my four-year-old cousin. Jennifer Hudson’s dress last night was the best PR move Weight Watchers could ever have. She looked absolutely breathtaking (and thinner than ever) in Versace, but she could have used a little more coverage in the cleavage area. 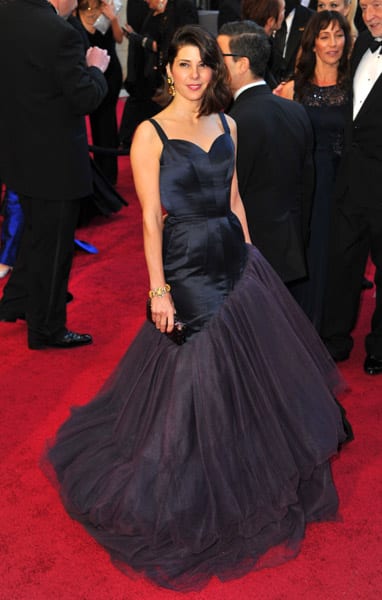 Nicole Kidman’s Christian Dior gown from the Spring 2009 Collection was too structured, too white, too detailed, too much! Reese Witherspoon always looks beautiful, but her black and white Armani Prive gown and Barbie-inspired high ponytail may not have been her best choice; we all know she can do better. Marisa Tomei’s prom nightmare, a vintage gown by Charles James, should have stayed in the closet. Not only was the dress ill-fitting, but the color was far from flattering and the poofy taffeta bottom was, well, taffeta. After all of the build-up, I found the awards show less than exciting, and some of the fashion followed suit, including Amy Adams’ deep navy gown (again). Even with seven costume changes, Anne Hathaway’s surprise singing was more of a standout than her fashion picks.

I can’t possibly write about the Oscars without noting Natalie Portman. She looked amazing last night  in a Rodarte violet silk chiffon dress. She again chose to wear stunning accessories from Tiffany & Co., which turned out to be quite the good luck charm! Speaking of hot mamas, the hottest accessory for a man to have last night was undoubtedly his mother. Russell Brand opted for the non-traditional dark blue suit with his mother by his side (wife Katy Perry was on her world tour). Mama Timberlake by son Justin’s side has this girl dreaming that Justin’s relationship with Jessica Biel will soon be over. He looked amazing in his Tom Ford tailored tuxedo; so ladies, if you need a date to next year’s Oscars, maybe he’s your ticket — fingers crossed. Until next awards season!