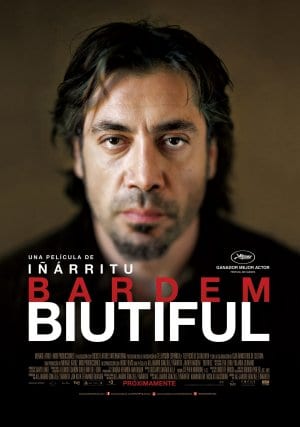 At the Golden Globes this year, it was considered an upset when “In a Better World” beat “Biutiful” for Best Foreign Language Film of the year. I hadn’t seen any of the films nominated, but there was some noise being made about “Biutiful “and quite frankly I hadn’t heard of a single other nominee. So I was just as surprised as everybody else when “In a Better World” took home the gold. However, now that I’ve seen “Biutiful” I’m a lot less shocked by it’s defeat.

Javier Bardem stars as Uxbal, a man living a complicated life which only gets worse when he finds out that he has cancer and only a few months to live. After this beginning, one can only hope that there is some sort of light at the end of the tunnel for Uxbal. However, “Biutiful” seems to be bent on tearing it’s main character down repeatedly until there’s nothing left. It starts with his somber diagnosis and continues on a downward spiral that carries all the way to the film’s dismal end. The one uplifting part in the whole movie is extremely brief and gets cut short by yet another crisis. This major event sends Uxbal back into the gutter, where he is doomed to remain until the credits roll.

Saying that “Biutiful” is a downer would be an understatement. This tale of woe is probably too much for most people, who would recoil at the thought of spending almost two and a half hours watching the main character get beaten to a pulp by his unbearable life. This movie is full-out depressing, something the average movie-goer is likely to steer clear of.

But regardless of how one feels about the story, there is still credit due. “Biutiful “was written and directed by Alejandro González Iñárritu, best known for his previous works “Babel”, “21 Grams”, and”Amores Perros”. Iñárritu’s latest may be too dark for some, but his talent and vision is undeniable. Artistically, “Biutiful “excels. The film is shot in a way that accentuates the grittiness of both Uxbal’s life and the surroundings he finds himself in. There is a logical progression to the movie – Uxbal’s life and body seem to deteriorate simultaneously. And Iñárritu’s characters waste no time getting to the heart of things, which makes for intense scenes laced with emotion and strife. So Iñárritu can at least take pride in the fact that “Biutiful “is a technical success.

“Biutiful”’s biggest issue is that the film’s excessive abuse of it’s main character creates a disconnect for the audience. As depressing as Uxbal’s tale is, it isn’t relatable. As a result, “Biutiful “is more likely to put a damper on your day but do nothing more. The film lacks the ability to create a truly empathetic audience – at best, you’ll simply wind up pitying the main character. And after investing just shy of 2.5 hours into the film, you’ll really be wishing that you came out of it feeling more.