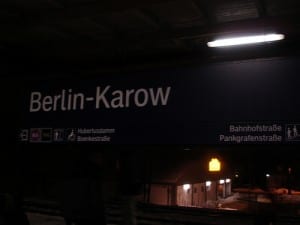 S-Bahn sign in Karow, a small village on the periphery of East Berlin. (Taylor M. Miles for Blast Magazine)

BERLIN — It all started with a bang.

The sound of the neighbor’s fuerewerk (firework) at 4:30 in the afternoon behind this modest house in Karow, a small “village” on the periphery of East Berlin shook the large-rimmed wine glasses on the kitchen table, or at least this American girl anxiously anticipating the New Year’s celebrations in a foreign city, and running on eight hours worth of jet lag.

My friend’s mother explained to me that she didn’t like to go to certain parts of Berlin on New Year’s Eve.

“It’s like a war,” she said, laughing in a contagious rhythm as she took another sip of her splashing red wine.

Fireworks are essentially prohibited 364 days out of 365 days in Germany and New Year’s is that exceptional day. The fiery explosions of brilliant colors would follow us around like a soundtrack to our own film, of which everyone around us was coincidentally a part. We spent the night traversing from café, to bar, to our final destination: Kulturbrauerei, an old brewery that houses about 10 clubs and bars, but tonight would host an outrageous New Year’s… how do I say “bash,” in German?

Things were still relatively tranquil as the S-Bahn (above ground, street subway) led us to the seriously-no-one-is-joking-it’s-really-that-yellow U-Bahn (underground subway) where we would exit the train to find ourselves in the downtown East Berlin neighborhood of Prenzlauer Berg, which my German friend hesitantly described as “alternative,” but becoming increasingly more “mainstream” (as a clarifier, all of these conversations taking place between said German friend are in broken Portuguese; it’s a long story).

I joked that the bar we entered, Kaffee am Meer, was a place “to see and be seen,” as the seemingly pretentious owner moved us from the snazzy pillow seats upstairs to the slumpy couches on the first floor because the couches were “reserved” for some cute glasses-wearing young’ns. I have had the unfortunate conversation several times, in several countries, about what a “hipster” is in the United States. My friend, however, said my sense that I wasn’t welcome by the owner and waiter was probably more a cultural misinterpretation than I thought. He then explained, genuinely, that rather than participating in ironically similar and superficial trends, as the term “hipster” seems to imply in the United States, it still can involve sincere individualism in Berlin. I shut up. 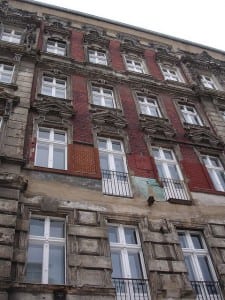 After some bier with lime and a caipirinha topped with brown sugar, we were soon eating fresh falafel from a paper slip next door and racing onto an S-Bahn before the doors could close on us and destroy our beautiful, cheap, and fast food. We got off the train at Eberswalder Straße, which is still in Prenzlauer Berg, and I pulled the green envelope containing our 27 Euro tickets to the Kulturbrauerei out from my purse, handed them to the security guards and we were in, well, still outside in the ice and snow, but in.

We immediately began wandering from building to building, meaning from music theme to music theme. I cringed as the sound of Aretha Franklin greeted us in the central area outdoors, only to be followed by the lyrics: “Celebrate good times, come on!” echoing at an unnecessarily loud level throughout the plaza. This was apparently the American “party songs” section. Just a few minutes earlier my friend had covered my ears to avoid hearing Schlager, a more traditional German music, which he found just as embarrassing, as we passed the older Kulturbrauerei attendees.

While the party officially started an hour earlier at 9 p.m., clearly it was not yet time to get down on the dance floor because, well, no one was. Beyonce awkwardly called for all of her single ladies to put their hands up, as the flashing red lights circled the empty floor of what must have been the seventh room we passed through as we wove in and out of the different-themed rooms. The bar tenders stared at us uncomfortably, while the attendees stared at us hopefully—maybe we would get things started (We wouldn’t). After making our way in and out of the different large red brick industrial buildings, we settled for a game of pool before heading back out to the main area outdoors (remember, the one with the horrible American music) to really get things started German style with some Glühwein, which is warm red wine with vanilla and cinnamon.

I had just spoken my first German phrase to a stranger, and though he understood me, I had no idea what he said in response; thus I smiled, pointed to my friend and twirled the other direction to play off my lack of German skills as intentional, cute. He asked if we wanted additional alcohol in our drinks, which meant additional Euros–apparently, we did not. Zwei (two) Glühwein later and somewhat recent Killers songs were entertaining a large crowd in the club towards the makeshift entrance; two shots of tequila later and electronic music was electrifying a crowd in a room one door over; one shot of tequila later and “R n’ B” was bumping in the room below it. After a few failed attempts to ask passersby what time it was in German, I soon discovered successfully that there were 15 minutes until 2011 by a man physically showing me his watch. We walked, or, wait, shoved our way through the dancing halter tops and mini skirts in the zero Celsius weather to a central spot in the outdoors plaza in order to ensure a good view of the fireworks:

The New Year greeted us with a bang. And the words of my friend’s mother, “It’s like a war,” rang in my head, as part of a firework burst and tumbled upon the woman next to me, singing her black winter jacket. The fuerewerk were only a few feet above us on the rooftop of the warehouse and as one after another exploded in the dark, cold sky, I thought about the fireworks I see on a yearly basis for the fourth of July—you know, the ones that are so far away from people due to safety precautions that for one to fall upon someone he or she would have broken a guarded barrier. Minutes later, though, the woman with the singed jacket was back smiling with the rest of us, as the sound of the last fuerewerk drifted gently from the plaza and we all headed back inside the old brewery to continue the never ending dance party. 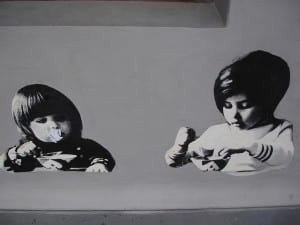 I pushed past the security guard and drunken crowd and was again overcome with anger by the English words ricocheting throughout this Berlin New Year’s party: “I don’t want to hear songs in English!” I yelled, in English. Aw, yes. Expressing my true American frustrations towards what, globalization (?), and the unfortunate proliferation of our entertainment culture across seas—the romantic desire to experience the undiscovered culture of the place in which you’re traveling. Within 20 minutes, however, I demanded we got “fly like a G6” and woke up like Ke$ha, or rather, P. Diddy after a bottle of Jack, as I dragged my friend onto the dance floor during these two songs. It’s funny how my musical and general immaturity follows me across seas.

We would spend the majority of the evening upstairs, where the electronic dance music fit nicely with the New Year’s excitement and the elevated center stage seemed to focus the madness. But 3:30 a.m. arrived with the exhaustion of continuous movement and sore legs, and after one last cruise among the clubs, we broke out of the Kulturbrauerei security gates and back into the “vild,” the streets of East Berlin. As my feet dragged up the ice-engulfed stairs to catch the U-Bahn, we could hardly make our way past the crowds heading the opposite direction.

“Their night is just beginning,” my friend said to me in Portuguese (I don’t speak German. English is his third language). We slid into the yellow train headed back towards Karow and the two doors had just shut together as someone set off a fuerewerk inside the station. The New Year’s celebration ended with a bang.