“The Blue Flower,” a Dadaist musical currently getting its premier staging at the A.R.T., offers an array of rich visual treats; There are striking symbolist paintings, grainy black-and-white homages to early 20th century German film, and playful imitations of avant garde performance art. Musically, it features the live performance of a strange, textured, and moving score in a style that’s a hybrid of German cabaret and Texan honky-tonk, termed “strum and twang.”

“The Blue Flower” also features an overabundance of flat narration, some textual, some spoken, and an amorphous plot pinned on thinly drawn characters who have no dialogue with which to define themselves, but rather a string of frequently cloying songs, melodically divorced from the score.

It’s a frustrating mixed bag: genius designs, a charismatic cast, an innovative score, and yet nothing concrete to invest in emotionally. It feels like a great play could break out any minute if only these comparatively trite songs would stop getting in the way. 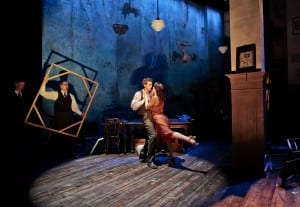 The plot follows Max Bauman (Daniel Jenkins), a somewhat frumpy yet passionate German painter, based loosely on Max Beckman, who begins his career during the Belle Époque, lives in Germany through two world wars, ascends to great success in the art world, and ultimately ends his life as a humble, lonely, misunderstood collage artist in New York City.

Along the way he falls in the love with Maria (Meghan McGeary), a scientist in the mold of Marie Curie, Hannah, a performance artist and revolutionary based on Hannah Höch, and (platonically) with Franz, an expressionist painter based on Franz Marc, who loves horses, cowboys and Marie.  Max weds Hannah, but he loses Marie to Franz, and Franz to war. These losses drive and haunt his work. As he loses his culture as well, he radically alters his form of expression, abandoning the German language for one of his own creation: Maxperanto, a hilarious combination of European sounds and onomatopoeias.

There is no doubt that Jim and Ruth Bauer, the husband and wife team who created the story, artwork, videography, script, music and lyrics for this production are bursting with creative energy, smarts and whimsy. The fact that this, there first theater piece came to fruition in no small part because it was championed by American musical theater giant, Stephen Schwartz, is in itself evidence that they understand the form well. And yet it is hard to say that this form is the ideal one for the story they want to tell, or that they themselves are the best suited to create each of its many parts. Like all of their characters, they are ambitious experimenters. In long run, it is a good thing that the A.R.T. has established itself as the supporter of such experiments.

“The Blue Flower, Directed by Will Pomerantz, with Music Direction by Mark Rubenstein, Vocal Direction by Charles Peltz and Dan Rodriguez and Movement Direction by Tom Nelis, plays at the A.R.T.’s Loeb Drama Center through January 8.