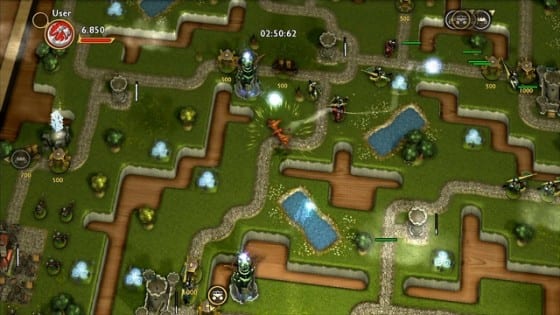 The PSN store is fast becoming the premiere testing ground for smaller indie games. For every Limbo that Microsoft throws into the spotlight, Sony usually has three other strange, yet lovable little games available that you should also be playing. Such is the case with Hoard, the latest to hit the PS3 download scene.

Essentially a cross between a strategic, dual-stick shooter and a board game, Hoard pits up to four dragons against each other over a medieval landscape in a contest of wealth and plunder. The gameplay is, at heart, pretty simple. You fly around an overhead map, attacking villages, caravans, castles, and other human constructions, pick up the gold left behind from the attack, and bring it back to your lair. The dragon with the most gold at the end of the game wins. Easy-peasy.

There are variations on the theme, of course. One game mode focuses on kidnapping and ransoming princess, for instance. Anytime you put a royal damsel in distress, the pesky humans will send out knights (aka, fried food) to rescue her. Hold on to the gal long enough and the humans give up and just provide the ransom instead. As it turns out, this is an incredibly lucrative career choice, as those princesses are worth lots of gold.

The interaction with towns is an area of particular creativity in Hoard. Sure, you can go around blindly burning everything to the ground, but as is so true in life, if you merely hurt them just enough, the humans will give up and start working for you. So long as you don’t destroy their town center, a conquered town will stop attacking you (while their archers will continue to attack your opponents) and send a steady stream of gold-laden caravans to your lair in what can only be presumed as a pre-Mafia, fantasy protection racket.

Letting towns prosper also makes the pay offs far more substantial. Caravans might start out carrying a few hundred gold, but as the game progresses, will end up containing three or four times as much. Beyond merely attacking towns, caravans, and princesses, the board offers several other creative obstacles. Wizard towers offer tons of gold and even special gems, but are absurdly well protected. One blast from a tower will send your dragon straight back to its lair to regenerate health.

Giants will often appear later in a game and start rampaging against both humans and dragon kind. If you attack one hard enough, it will get distracted and follow you instead of attacking a village. From there, you can potentially lead the idiotic brute to towns protected by other dragons, or just set it off to terrorize the hillsides. There are a lot of little touches like this that affect the gameplay in minor ways, but add up to a level of strategy that will please RTS-centric gamers without completely leaving casual players or newcomers behind.

While there are certainly some layers of depth to Hoard, the game is, at heart, built around the same sensibilities of a board game. There’s no persistent level building from game to game. You build up your dragons stats within a single game, but nothing remains past that. The maps vary in size, but are all fairly small and don’t change in any fashion beyond buildings falling and rising. The whole entertainment value of the game relies entirely on its pick-up-and-play design. Matches last about ten minutes, and then the game kicks you back out to the main menu.

The visuals are more utilitarian than beautiful. Hoard looks fine for what it offers, but the maps are rather bland looking, with simplistic representations of buildings and human units. The single player games consist purely of tutorials or bot-matches, so anyone expecting a story-driven campaign or anything beyond simple multiplayer will be out of luck.

For about $15, Hoard offers a distinctively fun and creative multiplayer game. It’s one of the few games that works equally well whether all players are in the same room or across the globe. Hoard is sure to draw in non-traditional gamers who want a game that mixes easy action with more strategic, slower pacing. That’s not to say Hoard is slow—it’s still all about gathering up as much gold as quickly as possible.

Blast Factor: Hoard is a pretty narrow game. It’s not epic or particularly deep, and is mostly just for players who want a quick match of something different. That said, the game goes about giving players a creatively fun multiplayer experience very well.