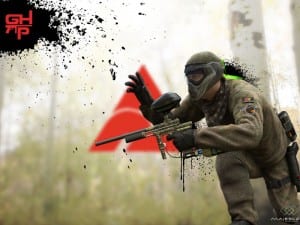 Greg Hastings Paintball 2 is an interesting departure from the typical shooter. It’s a strictly team-based title that is designed to be a hardcore, real-world paintball sim. There is a single player campaign that takes you through a series of real paintball tournaments and allows you to build a team of up to 10 shooters, while consistently unlocking new equipment and upgrades with money earned from the various events.  There is also a robust, highly customizable local multiplayer mode – and a map editor for folks who want to design paintball scenarios from the comfort of their couch.

It was a new experience for me to play a shooter where your opponents don’t get traditionally “killed” but are rather eliminated by taking a paint spec. What is not immediately obvious about this detail before you get into GHP2 is that it affects play by allowing users to periodically “cheat” and wipe paint off when they’re hit. It is a calculated risk to try, and best to do in deep cover. If the refs see you, the team loses two players instead of just one. Do it too many times in a match and you’ll be hitting the pine in hurry.

The other interesting game mechanic introduced here is the ability to slide. GHP2 features 3 vertical positions like CoD: prone, crouched or vertical. If players are vertical and hit the crouch button while on the move, they’ll perform a slide that stays low and puts them right up against cover if performed at the right distance. It certainly adds to mobility and can be used effectively to avoid danger in certain situations.

Screeshot is from HD version

When I agreed to review GHP2, I had the choice of either Xbox 360 or Wii. I decided on the Wii version because I wanted to know if a game like this could really handle itself with the Wii’s motion controls. If indeed that were true, it might be really fun. Several shooters, like The Conduit and Red Steel 2, are amazing on the Wii and I was hopeful this would also be the case with GHP2 – especially since it is one of the few to incorporate online play. Unfortunately, these hopes were quickly dashed.

First off, the Wii Zapper controls are so bad. Having to reach up to the Wiimote position and tap A to zoom from the Nunchuck position is a ridiculous chore – a deal-breaker really. You can’t win playing this way because you don’t have easy access to the whole host of game controls. Using the Wiimote/Nunchuck combo without a Zapper is slightly more manageable (although you should keep Zapper controls on), with easier access to the A button for zooming in and out. You will still have to hunt for buttons, however.

Unfortunately, all forms of motion controls in GHP2 are just entirely too spastic to provide any sense of real accuracy or room for effective strategy. Your slightest movements outside the field of view and most snap-back reactions will send you spinning wildly out of frame. If this happens while you’re running, diving or otherwise maneuvering, you’ll typically end up leaving yourself exposed in the worst of possible places. I gave the motion controls my best shot for a day or two. I really did. Ultimately, they were just too unforgiving for what is basically a stealth/ cover shooter though. You can widen the Wiimote’s dead zone so that aiming in the corners of the screen is more possible without the whole view changing – but it is still extremely frustrating to use.

Once I strapped up the Classic Controller, I started to enjoy GHP2 a little and understand the game of paintball. I have never played in my life, so a level of education was necessary.  Although GHP2 does not do a tremendous job of explaining the mechanics of the real game step-by-step, especially when it comes to equipment considerations and game types, it is really the best way to learn about the sport I can think of without actually going out and doing the real thing. After playing the GHP2, I feel like my first couple of moves on a real paintball field might not be all that terrible.

Screenshot is from HD version

GHP2 offers an absurd level of customization in both single-player and local multiplayer modes, and the incorporation of  real-life players, locations, equipment and even crowd noise all go a long way toward making the experience feel authentic. Fans of the sport will likely be at home with the title and have natural instincts on how to best cover territory and with which loadouts. Another interesting equipment wrinkle introduced here is the weight factor. You can pimp your gear out to the gills if you want, but it will cause you to suffer in the mobility department. It would literally take months to master all the various loadout options in GHP2, as you work to equip your team of (ultimately) 10 players with all the right stuff.

Blast Factor: While I did have fun with this game, there was rarely a moment when I didn’t wish I was playing something else. I liked the environment and gameplay variety. The sad fact here though is this is just not a good title for the Wii platform. It becomes playable and somewhat interesting once settling on a Classic Controller, but this is really just an argument for playing the game on another platform. If you have a 360 or PS3, don’t even think about this title for Wii. First off, it’s virtually impossible to find a game online, so that aspect of it might as well not even be there. Second, the graphics on the Wii version are really limited and present functional problems when trying to track your shots. You account for wind and gravity in GHB2 – which is cool and relatively original – but it doesn’t add much when you can’t see where the paintballs are going and the splotches you do see vanish almost immediately. The AI is nothing to sing about either. Your teammates are straight garbage.

For real fans of paintball, I might recommend this title on 360 or PS3. But definitely rent it first. If you do end up buying, you will get a free paintball pass for two that is valued at up to $300. If you use the voucher, I suppose you could say the game pays for itself.