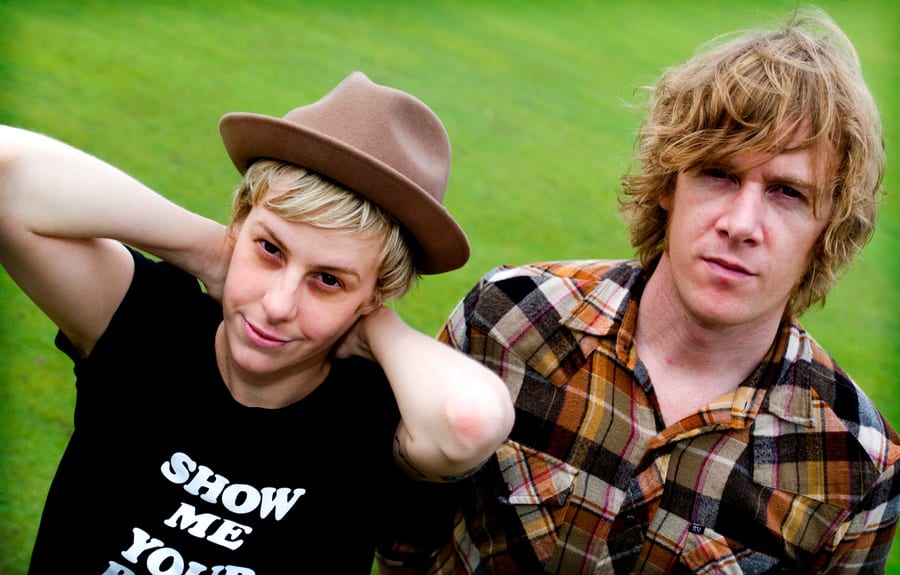 Before a recent An Horse show in their hometown of Brisbane, Kate Cooper, one-half of the Australian duo, was asked if she had ever been to the particular venue before.

“I had” she said in an interview with Blast a few days later. “I used to clean the toilets there.”

An Horse’s back story is a classic indie rock fairy tale. Call it “High Fidelity” meets “Slumdog Millionaire.” The band was conceived in a now-defunct record store in downtown Brisbane, and cultivated through a series of happy accidents that allowed Cooper and her band mate, Damon Cox, to go from working minimum-wage jobs and harboring rock star fantasies to landing a record deal and touring the United States.

Their debut full-length album, “Rearrange Beds” will be released in the States on March 17 and is already available on iTunes.

The pair met in 2005, when Cooper was hired at Skinny’s, a windowless independent record store in downtown Brisbane where Cox worked. (“We didn’t deserve to be called Skinny’s” Cooper quips. “We seriously went to work every morning and ate doughnuts.”)

When business was slow, they spent time bonding over a shared love of music, blaring mutual favorites like Nirvana and Metallica over the store’s speakers. Both admit they were probably less than stellar employees.

“We’d get a coffee in the morning and talk about a music all day” said Cooper, 29. “That was basically what we did.”

With both playing in their own bands — Cooper a singer/guitarist with Iron On and Cox a drummer with Intercooler and Mary Trembles — they became fast friends and regulars at each other’s shows.

They recall days spent driving around Brisbane, pretending they were famous musicians on their way to play a show for legions of adoring fans.

“I would ask Kate what city we were in” Cox said, with an audible trace of embarrassment. “It was kind of weird.”

In late 2007, Cox asked Cooper if she would be willing to perform solo as the opening act for one of his bands’ shows.

“She said, “ËœWell, why don’t you get up and play drums on a couple songs?'” he recalled. “And we, being the perfectionists that we are, had to have a few rehearsals before we could get up and play together. And we did, and it just really clicked.”

“We always had this idea in the back of our mind that maybe one day we’d like to try and write music together” said Cox, 32. “Once it happened, it just felt really good, and it kind of went from there.”

Using Skinny’s as a rehearsal space, the duo started practicing and writing songs together regularly.

“Even though we were busy working in the record store and doing other things we still always made time for An Horse practice, even though we didn’t even have gigs” said Cooper, who borrowed the band name from a grammatically-deficient sweatshirt she was once given.

By December, they were on a roll. On a whim, they decided to record a handful of songs with a friend in Brisbane and completed a five-song EP, with no plans to ever officially release it. But Cooper slipped a copy of the unfinished demos to Tegan and Sara Quin of indie duo Tegan & Sara, who coincidentally were playing a show in Brisbane the night they finished recording. Cooper had kept in touch with the Canadian twins after meeting them months prior when they gave an in-store performance at Skinny’s.

After hearing the EP, the Quins asked Cooper and Cox to be the opening act on their upcoming tour of the United States. To say the offer took them by surprise would be an understatement. An Horse had only played one show — an in-store performance at Skinny’s a week after they finished the EP to mark the store’s closing, with Cooper’s and Cox’s other bands rounding out the lineup. But they accepted anyway.

“We were at a point where … we still only had like seven songs or something, so we had to write some more so we’d have a full set to play” Cox recalled.

During the “Out of Hibernation” tour in the spring of 2008, Cox and Cooper found themselves playing mid-size venues across the United States with Tegan & Sara. It paved the way for them to spend much of the second half of the year touring on their own in the U.S. and Australia, including an appearance at the CMJ Music Marathon in New York during which, Cooper said, she was “literally dying” with a bad case of the flu.

Tegan and Sara Quin continue to be An Horse’s biggest cheerleaders. Sara in particular offered feedback during the recording of “Rearrange Beds” last summer and was instrumental in the band signing with Mom & Pop, a fledgling indie label based in New York. She also devoted several weeks to doing A&R work for An Horse at the end of last year.

Despite the help they’ve gotten on the business end of things, though, Cooper and Cox say they’re not looking to expand their core lineup any time soon.

“I don’t think Damon and I ever really made a conscious decision we would start a two-piece” Cooper said. “It was like, oh, let’s play music together, and we did. And it just fit really well and worked. … We thought it sounded great just the two of us and we didn’t need anyone else.”