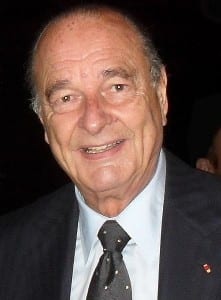 Many French people, when asked their opinion on the matter, said they were not surprised by the charges.

“If he did something bad, it’s normal that he be punished,” said Thérèse Belloche, 73, of Laval.

Belloche, who said she follows politics only a bit, said it’s unfortunate the wealthy often get away with corruption when those with less resources are forced to pay.

“It’s a question of lots of money, it’s an injustice,” she said.

According to the French Associated Press, Chirac, 77, is charged with using public funds to pay the salaries of his political allies between 1992 and 1995, when he was mayor of Paris.

Chirac, who served as mayor from 1977 to 1995, was originally charged with corruption in 2009, but yesterday more charges were laid upon him, which he will likely answer to in April 2011, when he is already scheduled to appear in court.

Most people, when asked Tuesday afternoon what they thought about Chirac and the charges, said they were not surprised.

“They are all liars,” said one Frenchman of politicians, while he was waiting for the bus in downtown Laval Tuesday afternoon.

The man, who refused to give his name, said he has never voted and called the recent strikes useless because he said they will not change anything the government has already done.

“We talk about only the rich…The government is the mafia,” he said.

Most people interviewed said they do not follow politics and were unaware of the corruption charges. Others said they had no opinion of the situation.

But for French polticos, Chirac is remembered for his wide-reaching reforms in France. He is known as the man who defeated socialist leader Jean-Marie Le Pen in 2002, reduced the presidential term to five years from seven, implemented many tax reductions and argued for business privatization.

He has also been suspected of corruption for over 10 years. His luxurious habits, including frequent holidays and lavish meals, have been long suspected to have been financed with the city’s money.

“They confused their wallets with the wallet of the French people,” said Robert Mazurais, 67, of Laval.

Mazurais, who said he is a member of France’s Green Party, said he worked in the public housing sector before he retired. He acknowledged that Chirac did much to help set up the system of low-income housing in France.

“He wasn’t a bad guy,” Mazurais said, but added that at the same time, Chirac took advantage of his status of wealth and power.

“It’s not normal that it’s the French who pay,” he said, adding that it was inevitable that Chirac be brought to terms with his decisions at one point or another.

According to the French Associated Press, an agreement was signed in 2010 between the city of Paris and Chirac’s political party, the UMP, where the UMP paid the city 2.2 million euros in exchange for not bringing civil charges against Chirac.

Still, Chirac is said to have denied all corruption charges since the investigation began in 1999.

According to the French newspaper Le Progrès, Chirac could face five years in prison and 75,000 euros in fees.