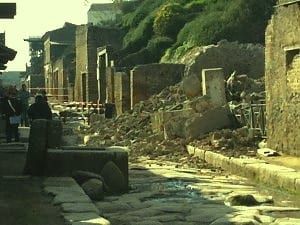 POMPEI, Italy — Serious damage occurreed at the Italian artistic heritage in the archaeological site of Pompeii where the entire “Domus of Gladiators” fall down. It was the place where the athletes were trained in ancient Pompeii.

The building was a kind of a gym where gladiators were trained. According to reports by the Superintendent, there were also painted on the underside perimeter of the room. The building was on Abbondanza street, the main street of the city buried by the eruption of Vesuvius in 79 AD.

The domus was only was protected by a high wooden gate. In the last days a little landslide has happened causing important damage because of heavy rains a ground in the insula has collapsed and a perimeter wall has fallen down. Italian Government (and also Unesco) has to protect the cultural heritage allocate more money to protect it.

Pompeii has always been in such ignoble conditions since nothing serious has been proposed along the last 50 years to protect and preserve one of the most important world wide heritage.

The ruins are one of the most popular tourist attractions of Italy, with approximately 2.5 million visitors every year.

Pompeii is something unique, as many other monuments of Italy. To change the current situation is obviously not effortless, in particular referring to the current modern Italian society, where everything counts, except what should really counts. Many citizen thought several time how we could preserve and protect our monuments, and in particular these kind of places. I believe that one possibility to save Pompeii, Herculaneum and the other archaeological areas existing in Italy is to make them profitable for the local inhabitants.

If the local economy was based on the archaeological excavations, Pompeii would be preserved forever by the local people, without any help from the national government. It’s just an idea. But it comes the time to think about a solution.