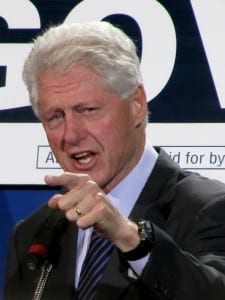 NASHUA — Win or lose, Democrats have made it clear that they aren’t going down without a fight. Part of that involves the Democratic Party bringing their big guns to New England.

Two weeks ago President Obama gave an impassioned speech at a rally for Governor Deval Patrick in Boston’s Back Bay. A week ago, he was at a private fundraiser in Providence. Yesterday, Vice-President Biden appeared in Quincy to stump for Congressional hopeful Bill Keating.

Lynch is a popular guy. He won his last two elections by a good margin and he’s well-ahead in recent polls as he seeks a fourth term in office. But John Stephen, his Republican opponent, has received visits from former Massachusetts Gov. Mitt Romney and former New York Mayor Rudy Giuliani.

“We have had a steady parade of prominent, national Republicans come to the state for John Stephen so to have a big-name Democrat for John Lynch is expected,” said Greg Moore, a local GOP spokesperson.

Speaking in a Nashua Community College gymnasium with about 600 people in attendance, Clinton presented some similar talking points as Obama did in Boston two weeks ago. Each presented the economic record of the local incumbent governor as a compelling reason for their re-election. Each pointed to George W. Bush’s two-term administration as the main cause of America’s economic malaise. Neither shied away from making a case not only for the person they were there to support, but for how people should vote in the next presidential election.

Clinton also said a few words on behalf of Ann McLane Kuster who is facing Republican Charlie Bass in a bid for the 2nd Congressional District.