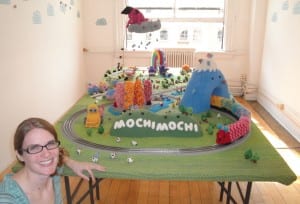 NEW YORK — When new acquaintances learn that Anna Hrachovec knits professionally, she receives varied responses. “Some people say ‘oh, that’s nice,’ and I often hear that their aunt knits, or their sister knits,” she says. “And then some people get very excited about it, which is fun.”

Hrachovec (huh-ROCK-uh-vic) maintains the knitting website MochimochiLand.com, which, in the parlance of the hip, is not your grandmother’s sweater. Since launching the site in 2007, Hrachovec has shared and sold patterns for knit toys of her own design. Her book of knitting patterns, “Knitting Mochimochi,” was released in June, and she most recently produced a knit installation, “Greetings from Mochimochi,” for Gallery Hanahou in Manhattan.

The installation is a culmination of Hrachovec’s inspired and occasionally twisted mind. Spread across a table in the gallery space (with a few rogue characters climbing windowsills and walls), Mochimochi Land features rat-infested skyscrapers, a rainbow covered in unicorns, a hot-pink God with Elvis sideburns sitting on a cloud, imposter Santas, self-actualizing snowmen, and swamp monsters. The installation was built around a model train — with a knit cover, of course — that she calls a “giant freakshow of a worm,” which follows a fixed route, occasionally malfunctions, and “enjoys British sitcoms and pistachios.” Many of the inhabitants are no bigger than your thumb, and most inanimate objects — cacti, bulldozers, gravestones — have little black eyes that stare back at you.

Hrachovec began knitting while she was an exchange student in Japan, and she cites Japanese kawaii design as a primary inspiration for her patterns. “I like the genre of Hello Kitty that’s extremely simple design, and I do like the big vacant eyes,” Hrachovec says. “The simplicity and smaller appendages — it does have an automatic cued response in your brain that it’s something you want to love. But I think the simplicity also means that you can read a lot of personality into the thing you’re looking at, because then it’s kind of ambiguous — if it’s something that’s just cute or something a little bit sinister.” 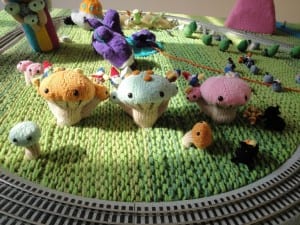 A Tulsa native, Hrachovec studied film and Japanese language at Dartmouth. Following another stint in Japan, she landed a job in New York at CWC International, a creative agency that finds placement for illustrators with magazines and advertising agencies. When CWC decided to launch a Soho gallery, Hrachovec turned their new logo into three-dimensional toys for her colleagues, which got her excited about other toys she could create.

“I do think a lot of people appreciate that I design toys but they’re not, like, dolls, or anything specific that would just be for children or just for girls,” she says.

Hrachovec began posting her toys on Flickr in 2006, and a few people noticed and offered to test-knit patterns for her. Soon after she launched MochimochiLand.com, which she named for the Japanese phrase “mochi mochi,” which dually functions as an onomatopoeia and an adjective for when something is sticky and squishy, like a mochi rice ball. The transition from working for CWC International has been gradual, but now Hrachovec primarily designs knitting patterns for a living.

While her anarchistic characters may sometimes seem to run the show, her website asserts that Mochimochi Land is “a place where knitted toys and people can live together in a spirit of tolerance.” In that vein, New York has been inspiring for Hrachovec, since it is home to so many creative people and galleries that can give her work broad exposure. Before deciding on the fantastical Mochimochi Land installation, she considered knitting a map of New York. “I love looking at maps of the city and different neighborhoods, and seeing things coming together in a very chaotic sort of way,” she says.

When asked how her parents describe her chosen profession to their friends, Hrachovec laughs. “I don’t know exactly. I think that they probably make a funny face, and are like, oh, you know, she lives in New York and likes to be creative,” she says. “And they always use that word, ‘creative,’ which is like patting me on the head.” She says the publication of her book helped legitimize her newly found profession, and her parents recently visited to see the gallery installation.

“I guess I knew that knitting was popular again this decade, but I was really surprised to see how many knitters are online, and they also very much use the internet for their hobby,” Hrachovec says. “I often get photos of the stuff that they make from my patterns, so it’s really fun to see.”

“Greetings from Mochimochi” is on view at Gallery Hanahou now through October 29.