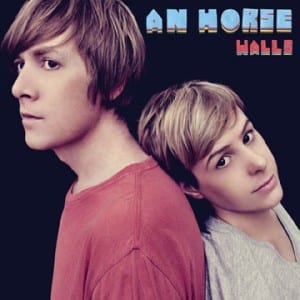 “Walls,” the latest album from Australian duo An Horse, makes it clear that vocalist/guitarist Kate Cooper and drummer Damon Cox have truly perfected their chemistry on their sophomore offering.

Musically, the album feels like the pair slowed down and stepped back a bit when crafting the songs this time around. Whereas their first album, 2009’s “Rearrange Beds,” was a virtual onslaught of distorted guitars and heavy drums — and a wonderful one, to be sure — the songs here are less intuitive, feel more thoughtfully paced and structured, and take longer to build to a climax (efficiently, too; none crack the four-minute mark). Standouts like the stellar title track and the perfectly harmonized “Know This, We’ve Noticed” are perfect examples of this slow burn approach. And even on the record’s more hard-hitting tracks (“Leave Me,” “Trains and Tracks,” and first single and leadoff track “Dressed Sharply”), the vocal melodies manage to restrain and frequently outshine the instrumentation.

Cooper continues to wear her heart on her sleeve throughout “Walls,” sounding endearingly vulnerable as always when singing her uber-confessional, often insecure, lyrics. But these aren’t your typical superficial torch songs; the sentiments she poetically expresses in them often expose a deeper longing. “Tonight, I’m thinkin’ of someone else / Which, in a roundabout way, means I’ve thought about you all day,” she admits on “100 Whales.”

Written mostly during a tumultuous two-month period during which Cooper relocated to Montreal during a break from touring behind “Rearrange Beds,” the album contains several references to being away from loved ones. The song “Brain on a Table” resulted from Cooper finding out her mother had to have major surgery in Australia while An Horse was on tour halfway around the globe. “My heart nearly jumped out of my chest when they told me yours might stop,” she sings over tense start-and-stop rhythms.

Whether or not the guiding hand of producer Howard Redekopp (who has worked with the likes of Tegan and Sara and The New Pornographers, and mixed “Rearrange Beds”) is behind their musical evolution, “Walls” finds Cooper and Cox stretching themselves in terms of songwriting, venturing into territory that might not be the most comfortable for them.