After a not so great performance in Monday’s competition, “Jersey Shore” star Mike “The Situation” Sorrentino, 29, was voted off “Dancing with the Stars.” 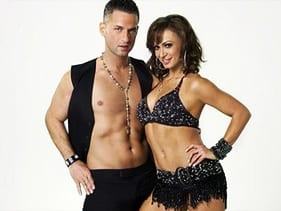 According to CBS News, he was spotted sulking in the parking lot, smoking a cigarette and shaking his head while a friend tried to console him, after the Monday performance.

On the show, Judge Bruno Tonioli had called his tango “a terrible mess” and judge Carrie Ann Inaba said it was a “rough ride.”

“I don’t know what their deal was. I really don’t know,” Sorrentino told UsMagazine.com after the dancing incident. “I was upset. I actually stormed off upset because I tried so hard. I really did. I changed my haircut; I don’t know.”

“I really did try my best, and hopefully the viewers saw that. I really put in the work and practiced, and I hope they put us through to the next week because I tried so hard,” Sorrentino continued.

“I really didn’t think it was fair,” Sorrentino argued during the elimination program.

What TV show is he going to jump in next?