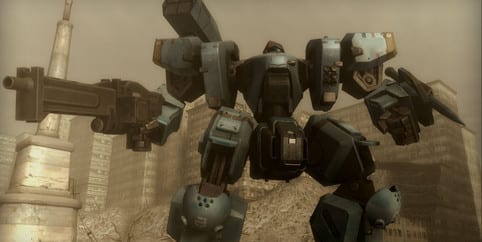 The scope of the video game industry has been evolving dramatically over the last few years. We now have sweeping

epics, with storylines that will (well..mostly) resonate with gamers everywhere.  One thing hasn’t changed though – gamers love big friggin’ robots with machine guns.

Enter Square Enix’s Front Mission Evolved, the latest installment in the long running, cult mech series. To boil the game down to its most simple form, you control and pimp out a giant killer robot and blast others doing the same to bits. Everything sounds great right? Not when you take into account that the bulk of the game feels much like its robot protagonists – empty, cold and soulless.

In the year 2171, the world is a different place. War has broken out between rival factions working out of airborne military bases (whatever, just go with it). As you may have guessed, these factions carry out the majority of their battles in giant robot mech suits. The mech suits (this isn’t Transformers, there’s actual people in there) are truly the coolest part of the game, and you’ll get an opportunity to pimp out your mech with a ton of different armor, mobility and weaponry options.

It’s this customization that adds a ton of depth and strategy to the mix. For instance, if you add a lot of guns and armor to your mech, you’re going to be moving slow and probably won’t last long. Sadly, Square Enix doesn’t seem to understand how big of a draw the game’s customization suite could be as too often in missions you’re forced  to load out with what the game wants you to use, and not what you have equipped your mech with. Why give us these customization options if you’re going to task me with doing something completely different.

Previous iterations of the Front Mission series have been turn based strategy fair, but Evolved takes the series in a different direction with an action heavy third person perspective. Most levels operate the same way, suit up, blast the level clear of bad guys, defeat a boss, repeat. Then there are the levels that take you out of the mech suit and have you running through the level defeating easy baddies and collecting money to use on your mech. On the surface, these levels should be a nice change of pace, but they come off as sub-par third person action sequences that you’re just going to want to get over with.

Presentation is an issue throughout Front Mission. The mechs themselves are detailed nicely, but the world around them is in total contrast. The levels are uninteresting and uninspired blurs of color and faint detail and the voice acting is some of the worst you’ve heard in quite some time. The biggest issue though is just how the game feeds you information. Throughout the game, blue boxes will appear on your screen with updated mission and story information – and these aren’t small boxes, they’re large and obtuse and do their best to block out the majority of the action. What results is a frustrating experience that sees you having to start an entire section over simply because your vision was obscured by the game itself.

As large as the entire game is, the whole thing feels like practice for the surprisingly fun multiplayer suite. The modes here are pretty standard, you’ve got your deathmatch, team deathmatch and domination modes, but it’s well the game handles some of the issues of the single player game that makes it so special. Gone are the limitations and worthless requests on just what you can use on your mech, in fact – giving your mech the coolest upgrades is the biggest and most rewarding experience in the game. The mode isn’t without its flaws though, chief among them is the fact that some games have some pretty incredibly high demands. Take the dominion mode for instance, you have to play to 1000 points. That’s a pretty high level, and I often found myself just waiting for the match to end.

The Blast Factor: Unless you’re the type of gamer that salivates at the thought of giant mechs; you’re not going to find much to like about the latest Front Mission. Evolved is much like its robot protagonists – a lot of cool ascetics but no real spark of imagination.