Da Zheng, a participant in the upcoming Boston Book Festival, is the author of "Chiang Yee: The Silent Traveller from the East." The book, published by Rutgers University Press in April 2010, is a cultural study of the Chinese writer whose 26 published works cover art, writing, travel, poetry, memoir, and children’s stories. Zheng is also an English professor and director of the Asian Studies program at Suffolk University. He is planning a similar project on Shih Hsiung, a writer who adapted the popular Chinese story, "Lady Precious Stream," into a play that ran for 1,000 nights in London and was later invited to Broadway.

Zheng sat down with Blast ro chat about his book, e-books, and the future of publishing, as well as offer some advice to aspiring nonfiction writers.

BLAST: How would you classify your book?

ZHENG: t could be a textbook. It would be very useful for Asian-American studies, and also for Chinese culture studies, even for American studies. People could learn so much through this book, in terms of the 20th century east-west cultural history. But I don’t think that most books from university publishers sell very well, because they are academic. But I tried to make it both. In between. Interesting and academic.

BLAST: Tell me about the book. How did you find your subject, and what about his life interested you?

ZHENG: I started to know Chiang Yee when I was in China. He had a book called "Chinese Calligraphy." I was interested in calligraphy, so I read through it and found it fascinating. So, with other people, I translated that book into Chinese and it was published in the 1980s. Then, I came to the States and I saw a copy of "The Silent Traveler in Boston" on the coffee table of my host family. It has Park Street Station; it is a familiar scene. But what caught my attention is the name Chiang Yee in Chinese. I realized that he is the same author of "Chinese Calligraphy," which I had just translated. I thought he was just an artist, without knowing that he was also a famous travel writer. My landlady told me that this was a very beautiful book, so I began to show interest in him. I read more and more, and I became fascinated with him.

BLAST: Do you have plans for any future books or writing projects? 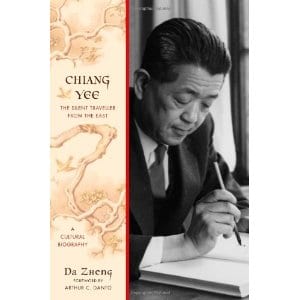 ZHENG: Most of [Chiang Yee’s] works were in English, so people in China do not know much about him. A publisher in China wants to translate his books on New York, Boston, San Francisco, and Paris into Chinese, so I am working on his biography. It will help.

BLAST: I noticed that it is not available as an e-book. Is that something you would ever consider?

ZHENG: Maybe I can make a suggestion to my publisher!

BLAST: How do you feel about e-books? Are they a good progression for publishing?

ZHENG: You want my honest opinion? Maybe I am old-fashioned, but I haven’t read a single volume of an e-book. But I know it is an inevitable trend. In fact, when I was in China, I walked into one shopping mall, which had a small section of computer technology. A lot of computer producers had rooms there, and one of them was selling e-books, like a Kindle here. It’s fascinating! It has over 400 books, and you can download as many as you want. I thought it was beautiful.

I understand it is inevitable, and the younger generation, like my son, is always asking me to consider itâ€”an e-book of my book would help spread the word, and get more people to read it. I would definitely ask my publisher.

BLAST: I assume you don’t have an e-reader, then?

ZHENG: No, not at this point.

BLAST: Tablet computers like the iPad are making even large format and photo-heavy books possible in e-book format, and some people are predicting that the traditional print book will be dead within five yearsâ€”which is really scary. Do you think that print publishing will continue on, or is it in serious danger?

ZHENG: My son is always trying to push me toward e-books, e-technology. I subscribe to the newspaper, and he always says to visit Boston.com. But I still love the papers! When I go over the old newspapers, I find a lot of articles that I can revisit, that I missed. I understand that more and more companies do e-form with or without the paper editions, but still I feel that paper books should still exist even after five years. For example, just the other day, I spent a lot of time trying to find some information, and I couldn’t get enough. So I went to the Suffolk Library, and I found a complete collection. Everything was there!

Even though, I have to admit, more and more now, I get my information through online sources. It is much easier; just a click away. But I don’t think it can replace the paper format.

BLAST: Do you have any advice for young people who want to get nonfiction books published?

ZHENG: I would say find a subject which interests you. Write with a passion, and be patient. Now, rejections come less and less. Just be persistent. Someday, you’ll find a niche.

Da Zheng will be on the "Mystery, History, and Art Across Three Continents and Two Centuries" panel, scheduled for 1:30-2:30 PM on October 16th in the Trinity Church Forum. His co-panelists are Elyssa East, author of "Dogtown: Death and Enchantment in a New England Ghost Town," and Erica E. Hirshler, who penned "Sargent’s Daughters: The Biography of a Painting." The panel will be moderated by Megan Marshall, author of "The Peabody Sisters."