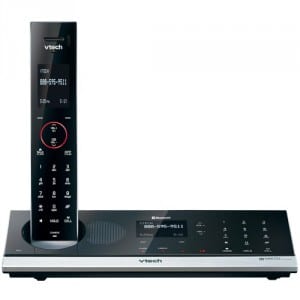 Expandable phone systems have been around for quite some time now, but what makes the VTech LS6245 so much different from the others and worth mentioning?

The unit is also designed for individuals who receive poor cell phone reception in most of their home. The LS6245 is great in a situation like mentioned above because users can connect their cell phones to the unit and leave their phone in a spot where cell service is plentiful and then use the LS6245 handset to travel around their home, even in the basement where you would never receive cell signal, all without having to worry about dropped calls or reception issues.

Out of the box, the system includes a base station with one handset that lives and charges on top of the base station. From there, you can connect up to 12 additional handsets to the base station, which do not require to be connected to a telephone jack. The first thing you notice when your unpack the device from the box is the sleek, shiny, all black design with brushed aluminum trim, which makes for modern looking, nice appearance. Both the base station and the handset use touch sensitive buttons pressed against an all black shiny surface. It’s almost similar to the two front soft keys on a first generation Black LG Chocolate phone. The shiny, all black surfaces look great and give the unit an elegant, yet modern feel; however one thing to keep in mind is that it does attract a lot of fingerprints. VTech is aware of this and includes a black microfiber cloth that easily removes dirt and fingerprints from the unit.

When you remove the handset from the base station, the first thing you notice is the eye appealing backlit keys that pop out and can easily be seen in both day in night situations. We really have to hand it over to VTech for doing such an awesome job with the backlighting on the handset and the stellar appearance. We also really like how they added a red circle around the navigation buttons, which is especially helpful at night and adds better organization. We can’t say that about the base station however. The company did such a great job with the backlighting on the handset, that it seems they forgot about the base! It’s disappointing that only the home and cell button keys light up, which makes it almost impossible to dial or operate the unit from the base station at night. 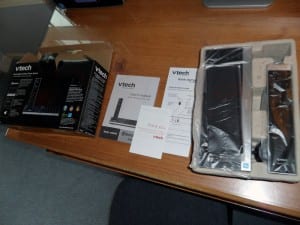 Aside from that, we’re pretty impressed with the LS6245. It paired very easily and works excellent with a BlackBerry Bold 9650. The entire pairing process took just a few minutes and was very simple. Once paired, the unit was very easy to operate, and call quality was excellent on both the handset and base. We initially thought that the touch sensitive keys might be a problem and make dialing and navigation issue, but that wasn’t the case. Both dialing and navigation was very good and I didn’t end up with one misdialed call, which we have had happen with other phones that utilize touch sensitive buttons. Dialing took a little to get used to since after you enter the number, you must press one of two buttons: one with a house on it or another one towards bottom of the handset that says "Cell." As you would imagine, these buttons correspond with the type of phone connection you wish to use. Calls placed though the landline gateway sounded loud and clear, even when using speakerphone on the base and handset.

Calls being placed though the cellular connection will connect via Bluetooth to your phone and the phone will then dial and place the call. One thing to note is the LS6245 does not charge your cell phone and your phone will continue to work off battery power unless you have it plugged in and charging through and AC adaptor. Also keep in mind that your plan minutes still do apply when you are connected though the cellular connection. Its also nice that the LS6245 has a nice little battery meter in the corner, which keeps you posted on the battery life for the cordless phone, but not the battery life on your cell phone.

We also like the intercom functionality. This feature alone is a key selling point of the device and it is incredibly useful. It almost works like an extension system you would find a public building. Select intercom from the main menu from either the base station or from a handset and then select which unit you wish to call. This will ring that phone or base station and you can have a one-on-one conversation with the person where the phone is located. This is perfect for families since they’re now able to call each other for simple things, rather than have to walk across the house for just a short message. One feature we would have liked to have seen, is the ability to broadcast a message to all the handsets at one time. Again, think how useful this could be in a family situation. Mom could say, "Dinner is ready" and broadcast the message to everyone simultaneously, rather than have to yell across the house or call room by room. I’m not complaining though; the one room at a time works for now, but in the future or through a software update, it would be nice to see a broadcast message feature.

There were a few things we didn’t like. In the directory, you must manually program each contact into the phone. This is not only time consuming, but is a pain and We’re not sure why VTech didn’t include the ability to import contacts via Bluetooth. The missing backlight on the base station makes it hard to dial at night and the phone can only be connected to two Bluetooth phones or a handset at a time, but paired to four, which may be an issue with large families. Finally, the LS6245 isn’t really an expandable phone system out of the box and to give it that functionality you must purchase additional handsets that cost around $40.00 per phone.

With its excellent call quality, ease of use and Bluetooth functionality, we can’t help but to recommend the device. It works great, looks amazing and is feature packed. The system is available online in a variety of configurations.