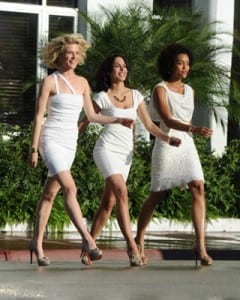 The new Charlie's Angels from wireimage.com

Thursday night was a big one for television, new and old.  Some fan favorites returned to the airwaves, joined by a few new comers.  USA Today’s Gary Levin reviewed the shows in brief, and here’s the gist of it.

Fox’s The X Factor made an underwhelming return on Wednesday night, and held steady in it’s second episode last night with low viewership.  The show only got 12.1 million views.

The Big Bang Theory‘s season five premiere pulled 14.4 million viewers for two episodes, according to Levin.  Most of the viewers stayed tuned for Person of Interest, which ranked first in the 9 p.m. slot with 13.2 million viewers.

Prime Suspect’s premiere was a flop, which marks the second failure for NBC this week (the first being The Playboy Club, which debuted on Monday). The new show got a mere 6 million views.

ABC’s Charlie’s Angels did alright with 8.7 million viewers.  This was an improvement on last fall’s My Generation in the 8 p.m. slot.

The eighth season of Grey’s Anatomy opened with 10.5 million viewers, which is a drop from last year’s 14.3 million viewer premiere.