For the most part, I think I kind of hate most racing games nowadays. I feel like ever since the very first Gran Turismo for the PS1, most games in the genre require FAR too many tedious and boring objectives that need to be completed for one to even make a dent of progress in whatever racing game you’re playing. Now, you couldchalk this up to my world class laziness, but the best way for me to explain why I feel this way about racing games is for me to just tell you: “Me want racing game to be fun! And me want racing game to be fast and easy to play!” I guess that’s why the Burnout series and Daytona U.S.A. come to mind as about the only racing games I’ve ever really enjoyed.

Well now, I can add Bizarre Creations Blur to that very short list. Blur, much like it’s hilarious commercial insinuates, is pretty much like bringing Mario Kart onto the city streets, sans all of the cuteness. It’s quite simply, a dumb, fun racing game.

Blur delivers all the speed that its name implies. It moves crazy fast, and looks beautiful, and gamers will have the opportunity to select nearly 60 real cars and race their way around numerous tracks. Along the the way, you’ll be able to collect some pretty bad ass power-ups-mines, homing missiles,nitro, etc.- and use them to house your opponents, whether real or A.I. And much like Mario Kart, you’ve got to use these power-ups strategically, which adds to the fun and palm sweating paranoia of playing this game. 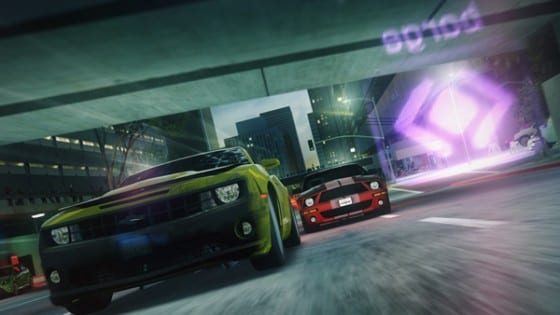 For proof of this, all one needs to do is take this game online. When I was playing some random (and competitive) strangers, I found myself not just enjoying the blasting of the poor fools who happened to be in front of me, but also constantly checking my rear view mirror for who was about to ruin my proverbial shit. Again, just a very Mario Kart-esque kind of feeling, and I absolutely loved playing Blur online.

Offline, Blur’s one player campaign offers the usual fare one would expect, such as checkpoint challenges, one-on-one races, and the incredibly fun “Destruction” in which you shoot the hell out of your opponents, and that’s about it.

To progress through Blur’s one player campaign, you’ve got to fulfill requirements, and more importantly, earn yourself some fans. Fans are earned by performing tricks and completing challenges, which then allows one to unlock new cars, and will raise your RPG-like level. Does Blur break any new ground with any of this? Hell no. Remember, this IS a racing game we’re talking about. No matter what, it’s pretty much always going to be “keep racin’ to be able to do more stuff”. No big deal though, as Blur’s multiplayer is where it’s at anyway.

Like any game, racing or otherwise, Blur isn’t perfect. I could have done without a lot of the Need for Speed Underground type neon glow to much of the H.U.D., and I was surprised with the lack of ingenuity that went into the tracks themselves, considering how nuts the races are. I know that probably sounds nit-picky, but I guess I just expected a few more surprising twists n’ turns is all.

The Blast Factor: This is the most fun I’ve had with a racing game in years. The multiplayer modes, both online and off are an absolute blast to play, and you can even link the game to your Facebook or Twitter account to taunt all of your pals after you’ve beat them. The controls are tight and responsive, the graphics (again despite a bit too much neon for my taste) are fantastic, and there’s enough here to keep even the most jaded gamer (hey, that’s me!) busy for months. It’s an absolute must buy.