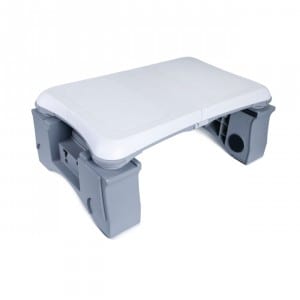 This review was pure hell to do.

The reason is that I hate Wii Fit.

Don’t get me wrong, I think it’s a wonderfully made game, and I think it can be extremely beneficial for those trying to lose unwanted pounds.

See, while I’m not necessarily overweight, I am lazy as shit. Because of this, the rare times when I DO pop in Wii Fit, all it proceeds to do is make me feel like an out of shape slob (which I am) and give me a bit of a complex.

Yes, I know that if I actually stuck with Wii Fit, and used it every single day all of these bad feelings could be avoided, and I’d soon be much more firm. However, I don’t have that kind of time or patience. Plus, there’s far more fun and awesome games to play,
and stuff to do that doesn’t require nearly as much effort. Like writing smarmy reviews and blogs!

Anyway, for those of you that use Wii Fit as it’s intended, and if you’ve found that you’re either bored with it, or that your workouts have plateaued, CTA’s Multifunction Step Platform is an affordable must buy.

The first thing I noticed while using the platform (after putting it together with minimal swearing) was that it’s additional height really enhances one’s Wii Fit workout.

While doing the aerobics workout as part of Fit Plus, I honestly thought I was going to throw up after about 5 minutes. Seriously, the next morning my hips, legs, and ass were killing me. For bored soccer moms, trophy wives or workout freaks this might be what you’re trying to achieve.

Me? I just wanted to smash this thing with a hammer. I guess that means that it works as it’s intended.

Upon my second day of testing, I did start to notice a problem with the platform. It seemingly causes Wii Fit to read your weight incorrectly on occasion, which is annoying.
I kept getting the message that “my weight is different from last time,” and it was short changing me by about 30 pounds (oh, if only!) Seeing as that continued to happen, I’d recommend that you actually weigh yourself first, and then attach the platform to the balance board. Again, that’s just kind of a pain in the ass, and it reeks of not testing this unit adequately before it shipped.

Once this problem was resolved, I started up another round of aerobics, and really did my best to basically try and break the Step Platform. No, not so much out of frustration of being dizzy and sucking wind, but more just to test it’s overall sturdiness. Well, I can assure you that the Step Platform is very stable, and is built very well. So, if you had any concerns about falling off of it, and breaking your neck, it’s probably not going to happen.

In closing, like I said earlier, if you still use Wii Fit regularly you should buy this thing.
It intensifies your aerobic workout, it’s easy to put together, surprisingly sturdy, and cheap.

Now, let me never have to review something like this ever, ever again.

Now I’m going to go back to playing Red Dead Redemption while sitting on my ass.

The CTA Multifunction Step Platform retails for $26.99, but can be found much cheaper online. Just search around.