Everyone and their brother is familiar with Facebook and its plethora of in-browser games. There’s the oddly alluring and ultimately addicting games like Farmville and Mafia Wars that seem to make no sense outside of their location on Facebook, but what if you want something else? Something silly, fun and brain-teasing? 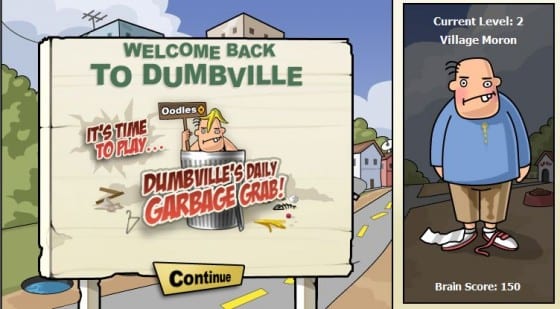 The Game Show Network has a digital brand dubbed GSN Digital Labs and these game-makers are storming Facebook with a unique game.

It’s called Dumbville and with a enjoyable pick-up-and-play quirky quiz design, coupled with in-game currency actually worth something, it’s a game that should be on your radar.

I teleconferenced with Jeremy Shea, vice president at GSN Digital Labs this week, and he told me all about the project and why it deserves your attention.

Blast: What the heck is Dumbville, anyway?

Shea: We call it a hokey, irreverent MENSA challenge, or a brain-buster. There’s no way it’s going to get you into MENSA or any collegiate institution, but [the challenge of creating the game] was to find content that we could write, draft and produce in such a way that it was frustrating, but no so frustrating that you didn’t do it. We’re looking for people to not get upset when they can’t get it right the first time or the first ten times, but rather have that be a sort of Homer Simpson D’Oh. When you finally realize what was the correct answer, you realize "oh my God, I can’t believe I’ve been answering that wrong 20 consecutive times…" We thought that had a lot more legs for being viral right out of the gate than traditional casual games.

Blast: Talk about the in-game currency of Dumbville and what it affords the player.

Shea: GSN launched a currency, prizing currency last summer, and we’ve had tremendous success with that virtual currency. It’s like any other virtual currency program and you can redeem those for a variety of prizes on GSN.com like sweepstakes entriesâ€¦

The fastest way to draw in growth and engagement on Dumbville would be to make it available to our passionate, fanaticals, point hoarders on GSN and give them another channel, another vehicle.

The way that is probably the virality of the application is a concept we came up with called friendfails or dumbfriends, and what the idea is, is every time one of your friends fails a level, you’re gonna earn five oodles. So you benefit at your friend’s demise, as we like to say, which is very different than a lot of the other social apps where your friends do well and you do well. Here it’s sort of a juxtaposition on that concept. You’re actually rooting against your friends.

Blast: Tell us all about Dumbgifts and why, when they release, gamers will want them?

Shea: Right now we’re trying to come up with more ideas to sustain the virality of the app beyond what we have now, which is the friendfail component. What we’re going to try to do is come up with concepts where you can build Dumbville collections that you may unlock.

The content of those gifts is going to be what you’d expect in a town that’s run by idiots. So everything we’re doing is tied to this brand of being dumb and sort of irreverent, hokey. When we’re building this, I always think of the old Monty Python episode with the village idiot on the wall. That’s sort of what we’re trying to do. You can imagine the gifts are going to be things no one in their right mind would want.

Here’s an umbrella full of holes. The galoshes made of leather. It shows up in your newsfeed, it’s a funny invite to your friends. Our estimate is to have that launched in 25-30 days.

Blast: So, I can rise from Village Idiot to Mayor Of Dumbville. Both titles don’t sound very great. Why do I want to become Mayor of a town of morons?

Shea: You want to become the mayor of Dumbville for the primary reason of saying you were actually able to sustain yourself through a battery of these tests.

Mayor is not going to be the end of this application. It’s just sort of where we are now for our first 30 days.  You’re gonna start to see the traditional cabinet members, the administration, the unique things that you’ll see, in the next 25 levels once you hit mayor, will put you more on the national government scenario. 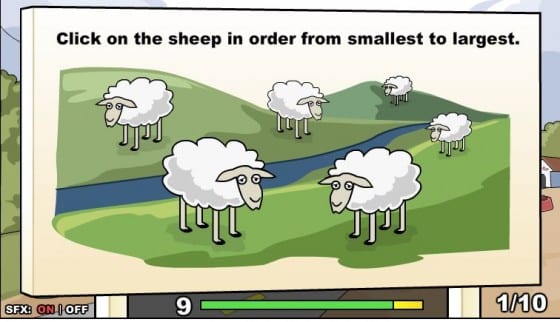 Blast: Do you ever think about the consequences of the social games you make? That is to say, how do you feel about students failing real-world tests because they were up all night playing your game?

Shea: I’ve worked in the casual gamespace for so long, if I started thinking about that I probably wouldn’t be able to sleep. We’re more focused on providing something that’s different than what you get in your traditional role playing games, like Mafia Wars or Social City. It’s not meant to be about sitting there and mindlessly clicking on parts waiting to grow asparagus, or to harvest your apple trees. It’s supposed to be digestible, fun, a little bit of a stimulus for you. When you play you actually have to do a little thinking.  We’re not really worried about what we’re doing to the youth of our institutions.

Blast: How successful has Dumbville been for you, in this first launch month?

Shea: Right now we’re very happy and also optimistic about where we are in the first 25 days. After 25 days we’re at 155,000 monthly active users, and that’s not even a full month. We’re doing about 20,000 active users a day. If you would have asked me 25 days ago a number I would be happy at  it probably would have been about 50 percent of that. So we’re very positive about where we are. The first 30 days for us was a lot of learning, working in the Facebook world, learning how to stimulate virality, and how to work within the confines of Facebook and the opportunities they provide. I don’t see any reason why in the next few month this won’t be a top app and have a seven digit following.

Blast: How do you feel about Facebook as a stable platform for your games. Is it stable?

I do believe they can sustain this as long as they continue to recognize that the developers that are out there, drive the traffic and do what they can to make sure they a supportive of the development community.

It’s hard for us, as late stage adopters, to drive an app to 82 million, but I don’t see any reason why with 400 million people and growing every day, Facebook won’t be a significant player in the games space for the next three to five years.