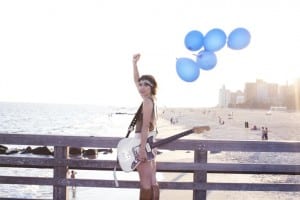 For Leah Siegel, her musical act Firehorse and latest album, “And So They Ran Faster…” have been a long and hard-earned time coming.

As she told it, after years of working and performing in Boston and New York, she came to realize that she wasn’t being honest in her art – or with herself.

“I sort of took a step back and I thought ‘Something is wrong here. It doesn’t feel like me. I feel like I’m cutting corners so that I can fit in someone else’s kind of paradigm of belonging, of what I’m supposed to be, where I’m supposed to fit in,’” Siegel said.

Burnt out and broke, she decided to start from square one to remember what she loved about music and who, as an artist, she really wanted to be.

In this search for identity she stumbled upon a zodiac calendar, which placed her under the sign of the Horse. Researching further, she found the story of women born under a subset sign, the Fire Horse. Born just after the turn of the 20th century, they were thought to be “too gregarious, too independent, too fiery”, as Leah explains, to be suitable matches for anyone. As a result, in an era of arranged marriages, they were fated to live and die in destitution.

Feeling out of place, without real artistic identity, Leah was struck by how deeply this story of rejection and inability to express oneself resonated.

“I knew that I felt wild, and out of control, and destructive, and goal-oriented, and gregarious. And I felt all of those things, but certainly wasn’t channeling that in my music,” she said. “I listen to it now and I imagine someone holding a gun to my head.” 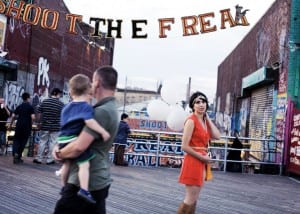 It hasn’t been easy, though. Leah admits that part of adapting the Firehorse identity was embracing her own femininity, which, in the recording industry, often seemed to be an obstacle.

“It does seem that dude industry guys can take on like five boy bands, who sound exactly the same, but only take on 1 chick. Ever,” she said. “It’s like his penis compass gets so out of whack when there’s more than one woman in his life, you know what I mean? It’s just like whipping him around and he can’t get anything done … I like to think that that’s really what that’s about.”

It is little surprise that in writing “And So They Ran Faster…” Leah feels that she faced some of the darkest writing she’s ever done. It was “a battle” to complete, she said, “and I would just sit down and be like ‘I can’t take this anymore, it’s so dark. I’m gonna kill myself if I don’t do something else right now.’”

From these moments came songs “Our Hearts”, and “Machete Gang Holiday,” unquestionably the most lighthearted tracks to be found on the record.

“Those songs were sort of as I was starting to experience different feelings, ideas, and sensations in my life after many years of kind of feeling just quite bad,” she admitted.

While it’s clear she’s come a long way, even she hesitates to say what comes next. She’d love to do a tour, “because the live show is really fuckin’ awesome”, she said with a laugh.

But for a self-declared workhorse, the sky really is the limit.

“Now, as an artist,” she said, “you’ve never arrived. Because there’s always some other boundary, there’s always some other limitation you see in your artistry that you need to crash through. That’s how I feel about it, that’s always how I felt about it, that art is the only thing I can do with my life that, I don’t know, could send me down the rabbit hole…I just imagine that I’ll always be lugging boulders up the side of a rock cliff – an eternally rising rock cliff. Which sounds awesome to me.”

For now, Siegel hopes that her work resonates with listeners, but she’s willing to be candid about that, too.