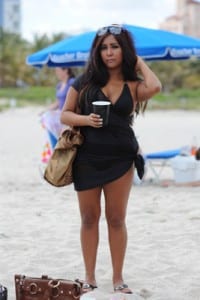 Snooki, the “Jersey Shore” star who was punched in the face during the first season of the hit MTV reality show, got herself kicked out of a bar in South Beach over the weekend after getting into a fight with another customer.

Snooki, whose real name is Nicole Polizzi, is filming the second season of the reality show in Miami and, according to People, has filmed some scenes in the popular the bar Ocean’s 10. But things got crazy on Saturday. According to People, a newly single Snooki, after drinking shots with castmate Jenni “JWOWW” Farley, got pissed off when a guy tried to pick her up. She swore and yelled. He swore and yelled back. Then she allegedly threw food and a glass of water on the guy. Both got kicked out.