As I walk around the back of the media tent, I see Griz standing with a photographer finishing a cup of iced Kuerig saying, “I love coffee.” I ask him where the VIP set with Exmag will be later tonight to which he responds “I have no idea.” I laugh, take a photograph with my friends and him, and prepare some questions for my interview with Big Gigantic. Around me there are radio hosts checking their iPhones, managers scrambling to set up interviews, photographers chatting with each other about who got the best shots of Flying Lotus the night before. Big G’s manager Bari strolls over to us and tells me I have five minutes before the interview. I give up trying to formulate questions; interviews are usually more fun when you wing it.

Check out all the photos we took HERE

I think back over the festival’s first day. Friday morning I checked out the Catskill Cave tent to see, Tauk, a funky four piece band from New York City which reminded me how macbooks aren’t the only way to make awesome music. Then I traveled across the festival grounds to the Circus Tent for Lindsay Lowend’s set, which consisted mostly of Jersey Club and Cashmere Cat-esque music. I really liked the Circus Tent – at any time of the day or night you could enter this massive tent for dazzling lightshows and bass music. The scale of this festival was amazing considering the amount of people set to show up. The grounds could have easily hosted twice the amount of people they did this year. After a dose of dance music, I went back to my tent to prepare for my interview with Tauk. On the way I passed groups performing yoga in the New York Tent, vendors selling wild tapestries and trinkets, and an onslaught of non-sober festival attendees staring in amazement at the new world of sights and sounds they had just entered. 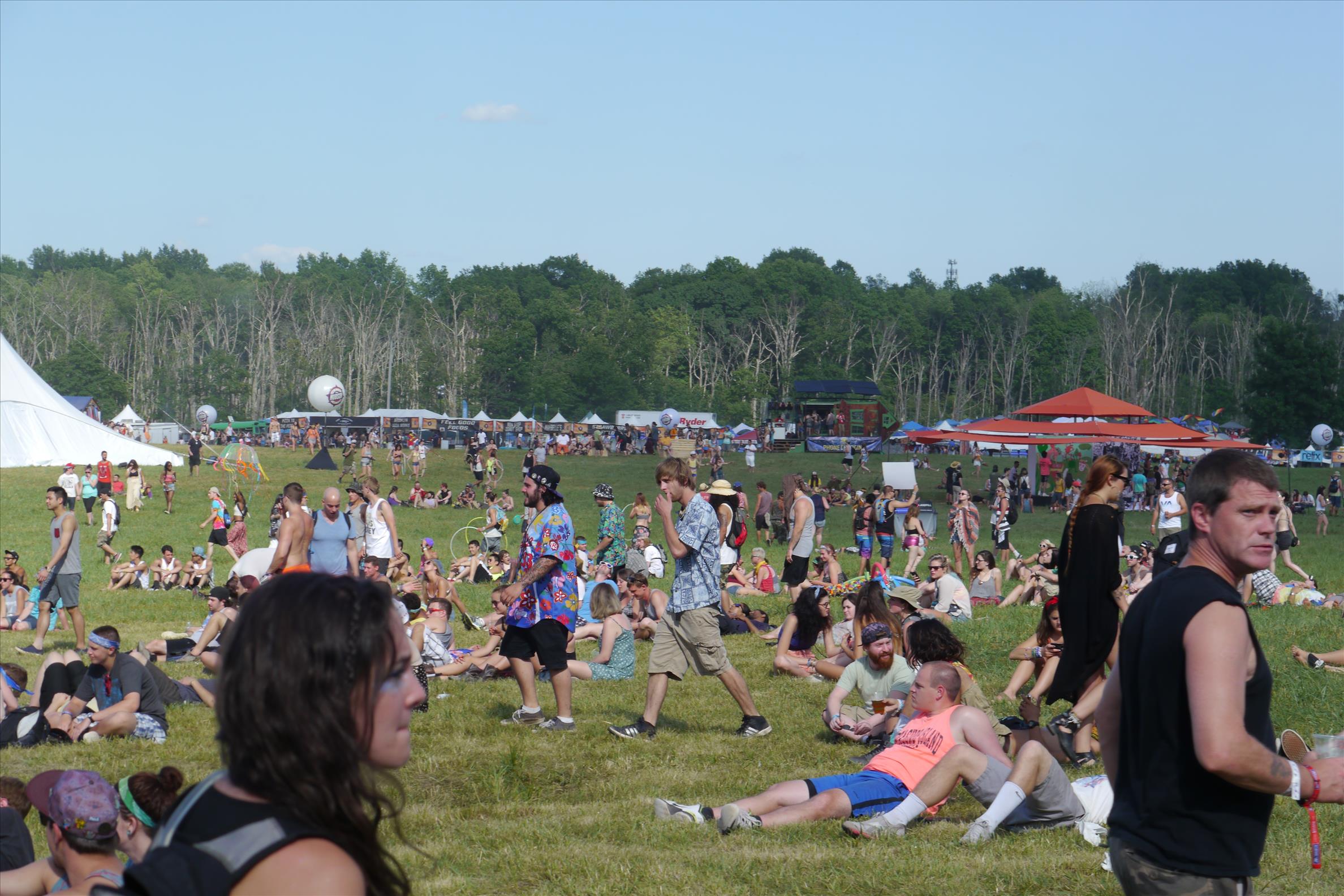 After my talk with Tauk, I returned to the Circus Tent and camped the front railing for Keys N’ Krates and Bro Safari. Keys N’ Krates is a great act – their combination of live drums, midi performance, and scratching really opened me up to what kind of sounds a band can bring to the world of bass music. STS9 was on the Explorer Stage next, set up nicely so that viewers could enjoy the music sitting on the adjacent hill. I took this time to appreciate the sights around me – the ferris wheel twirled fluorescently in front of a full sky of stars. The moon that weekend was sized in epic proportions. STS9 was a good act to relax to before Excision. I met up with a few friends and braced myself as I entered the tent. There’s no doubt that Excision brought on one of the most energetic and insane sets at the festival. The set was not short of dirty basslines, raw harmonic bass wobbles, and countless remixes and VIP mixes from Excision’s massive musical library. Heaviness has a new name: Excision.

After a short break, I returned to the Circus stage to see the light and sound crews setting up a massive projector backdrop. I camped out right behind the light guys to get the best possible view of the lasers and lights that Flying Lotus was about to bring on. Flying Lotus plays the role of a mysterious, multiple-identity figure who hides beneath the shadows of his music and visual effects. He was undoubtedly on the same level as his audience that night, entering the stage saying, “I’m so high right now and my monitors aren’t working so I can’t hear myself, but f*** it I’m going to play music anyways.” As a performer, Flylo was self-aware and always present, toying with the crowd’s mind, building them up, knocking them back down, throwing everything they thought about music upside down. His projections would often mask him and his DJ booth entirely, as if there were nobody there. Flashing strobes would reveal him for a second, only for Flying Lotus to disappear a moment later. He rapped a few songs as his alter ego Captain Murphy, a digital projection which reminded me a lot of the Gorillaz, bearing mechanical laughter and mind-bending voice pitches and effects.

Flying Lotus hiding behind his projections.

As the lights went down and the people filed back to their tents, I had a strange feeling creeping through my body. I felt as if I had been graced by the future of music – sounds I could never imagine had washed over and cleansed my being. Flying Lotus was no doubt the highlight of the night. His music was what I can only describe as invigorating, metallic, sharp, future sounds which challenged my mind. Along with Keys N’ Krates, Flying Lotus seems to be setting the tone for what the future of hip hop, trap, and EDM will be.

The second day of The Hudson Project seemed to dominated by music’s sexiest instrument: the saxaphone. My morning started out front row for Exmag, a funkadelic EDM band from the distant future. Exmag mans the beats alongside a guitarist and a keyboardist/synth controller; the result is groovy. Next I dipped over to the media tent to sit down with Big Gigantic before their set. I’m a huge fan of Big G and meeting them had me a bit starstruck. Nonetheless, it was great to chat with the artists and hear what they had to say about music. 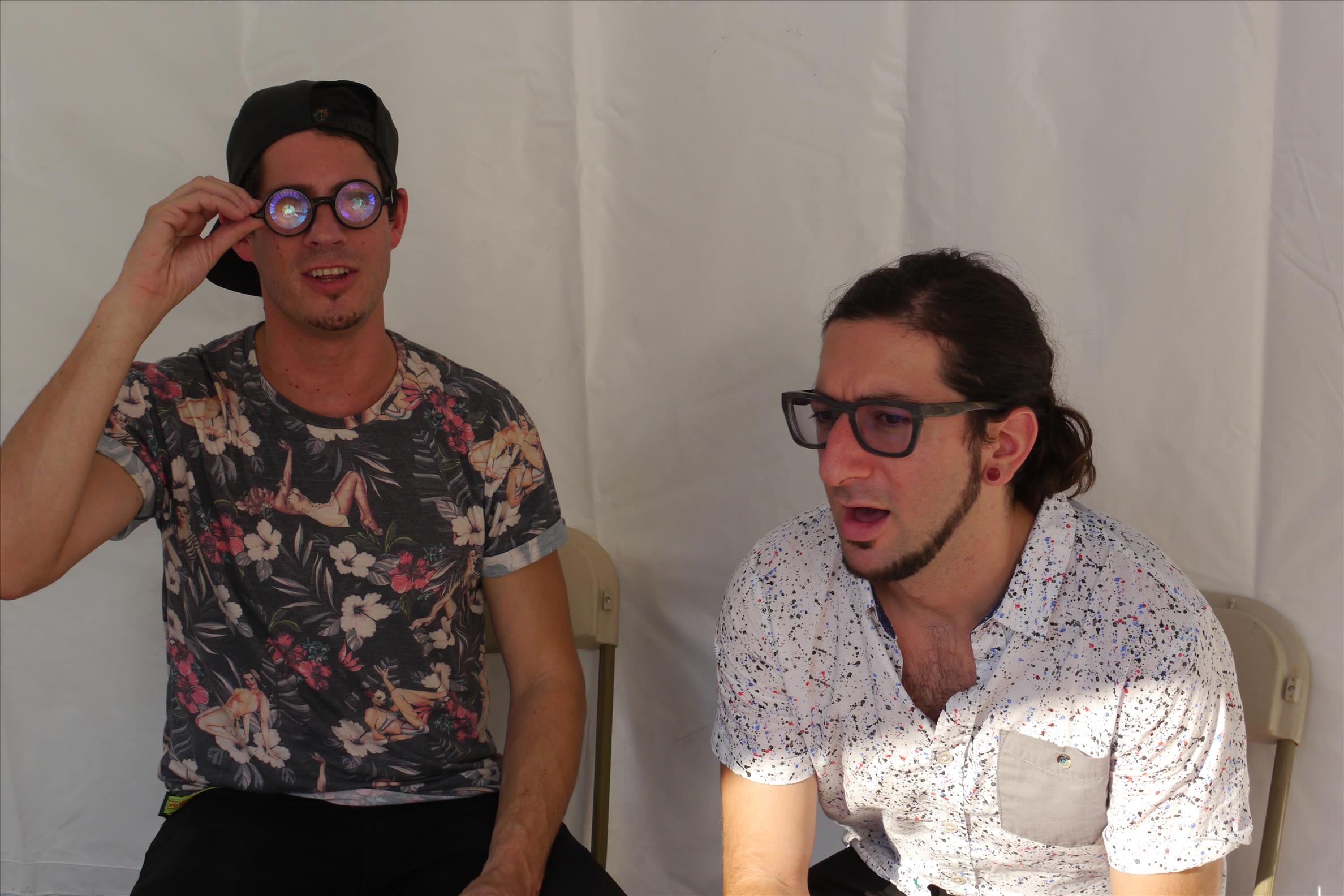 Dominic Lalli and Jeremy Salken of Big Gigantic tries on our refraction glasses.

Here are a few of the questions I asked them:

I asked them if they ever went in the crowd at festivals:

“I’ve been going to festivals since I’ve been like 18, camping and, way before we were playing music. We’re avid music fans – we’ll go see our homies play, we’ll go out in the crowd and watch, that’s where the real vibe is happening”

I asked them about Flying Lotus, to which they said:

“The dude is on some next level shit – his stuff is so psychological. It’s like the jazz of electronic music.”

I only had a few minutes with them, but during the time I realized how relaxed these guys were considering they were about to play in front of thousands of people, but hey, I’m sure they’re used to it by now.

On my way to Bonobo I strolled past the mainstage while Rebelution, a top-charting reggae band, played on the mainstage. Bonobo was the relaxing talent I needed before the dancing that was about to come. Donning my Hello Kitty totem, I hit the mainstage for Big Gigantic’s set. I’ve seen the band two other times before and was not disappointed in the slightest. Big Gigantic perfectly brings together the aspects of production and live performance and kills it onstage every time. The other highlight from Saturday was Griz’s set. Griz really know how to work a crowd between his saxophone skills and his live remixing and mashing up of his own music. Saxaphone trap? You bet Griz pulled it off.

Earlier Saturday I got a response from Griz’s PR agent declining an interview, but she did hint that there might be a secret VIP set of Exmag and friends at 1:15 am, so after Griz’s set I wandered off in search of the very important people. Some friends and I managed to wander in the area behind the mainstage, and lo and behold we stumbled across the VIP temt where some equipment and speakers were set up. A few other people knew about this secret set, so I lounged out on one of the “very important” couches. Soon enough, Griz poked his head into the tent along with the members of Exmag and set up equipment. Seeing Griz and the guys jam up close was a treat; I was reassured there is a lot of talent in the EDM industry. Dance music is not just some fool pressing play, it’s humans creating music. The variety of sounds and styles that come with the digital age is boundless and artists have just really begun to tap into that potential. 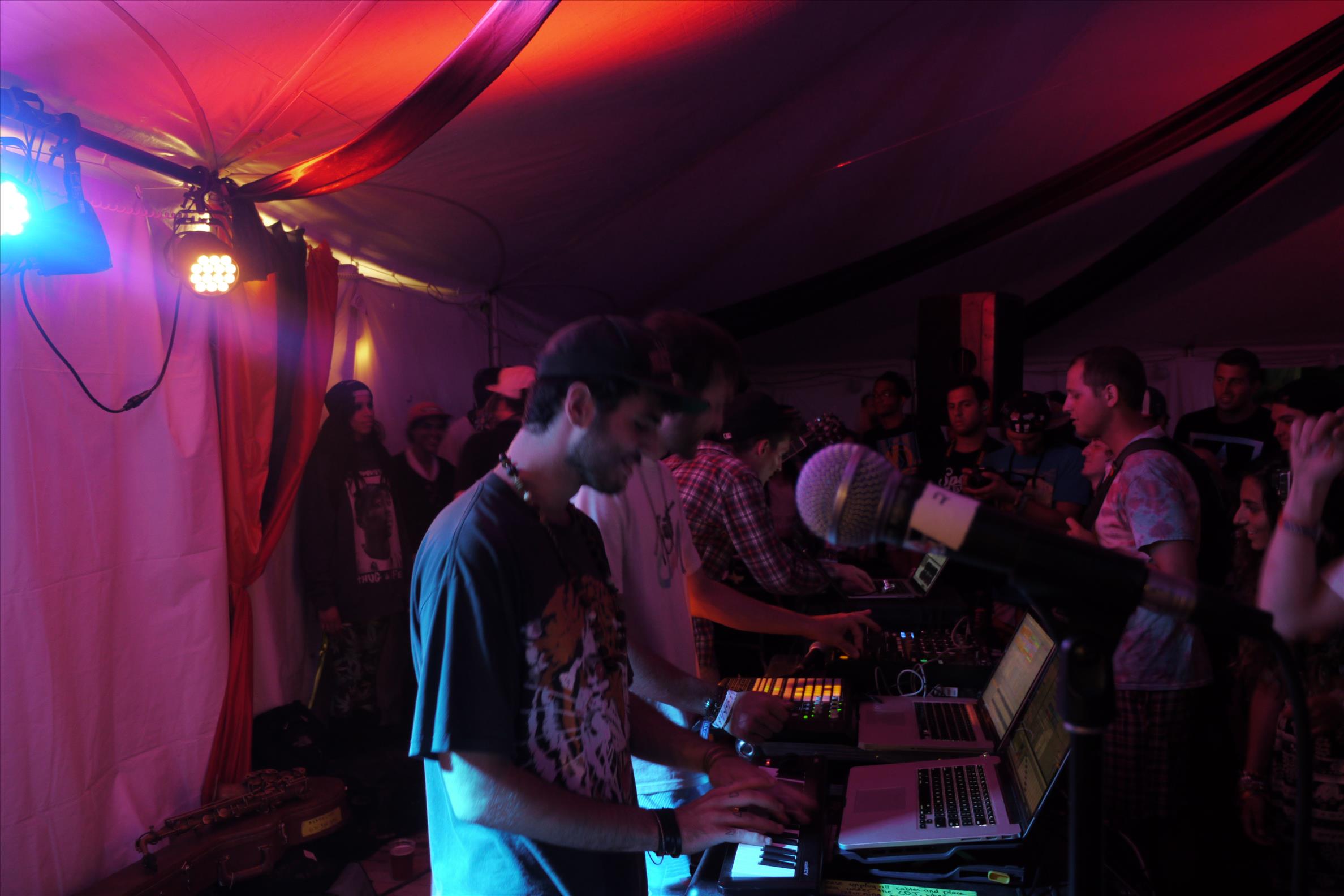 Sunday morning I decided to sleep in a little bit. I had to save up energy for some of the huge artists that were set to play that day. Lunice, 12th Planet, Tipper, STRFKR, Infected Mushroom, Paper Diamond, Oliver, and of course, Bassnectar were all acts I was extremely excited to check out that day. Unfortunately, I was awoken from my nap by a festival employee telling my neighbors and I to evacuate the campgrounds. Most people didn’t blink an eye; a young man attempting to give me a bag of melted butter claimed he looked at the radar and the storm was due to pass in fifteen minutes (I didn’t trust him anyways). Luckily, my group was sober and we acted swiftly, bringing our belongings to the car before the onslaught of rain and mud began. I heard a few staff saying they would never cancel any acts, and that they would just push everyone back, so I hung out in the charging tent and chatted for a bit while the rain passed. To my despair, a few people walked in with pouting faces bearing the bad news: the festival was cancelled.

So what happens when you tell 5000 intoxicated people there’s no music for the rest of the day? Apparently they make their own, muddy party and sing White Stripes:

While a lot of the festival-goers complained about the event’s management and organization of the rainstorm, I didn’t think there was much they could do about it. The Red Cross set up a site to handle all the campers whose cars were stuck and staff stayed to manage the safe closing of the sites. Since MCP Presents and SFX Entertainment apparently hold five-year contract over the grounds at Winston Farm, I wouldn’t be surprised to see The Hudson Project back next year and in greater numbers.

That’s it for this. Stay posted for more EDM stuff – I have coverage of DADA LIFE and FEED ME coming up in the next few months, so stay tuned!