He already has a signature snowboarding game, so it only made sense for Ubisoft to today announce “Shaun White: Snowboarding.”

On LA’s KROQ radio station, a giddy White gushed about the project yesterday.

“I can’t describe how excited I am about the skateboard game,” said Shaun White. “We’ve been working on it for a while now and it’s ready to melt minds.”

But not only does the frizzle haired extreme athlete believe his game is super cool awesome, so does Ubisoft.

“As we’ve just seen at the Olympics, Shaun is a one-of-kind action sports athlete,” said Tony Key, U.S. senior vice president of sales and marketing at Ubisoft. “Shaun’s enthusiasm for skateboarding shines through in this truly unique game.”

With sales of Tony Hawk skateboarding games at a series low, it makes sense for another to jump into the fray (besides the “Skate” series). Just hope White and Haw can remain friends outside the digital world. 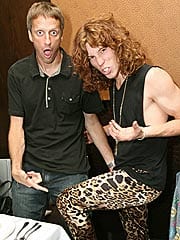