Anyone purchasing a used copy of next week’s “Battlefield: Bad Company 2” will miss out on a heaping amount of content, as publisher Electronic Arts today said it’ll bundle maps with new copies of the game. 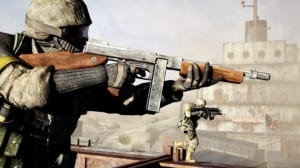 When you purchase a new copy of the game next week for PS3 or Xbox 360, inside the packaging you’ll find a code good for downloading Laguna Alta for Conquest mode and Nelson Bay for Rush mode. Moreover, later in the month, that same code will get you Arica Harbor for Conquest and Laguna Presa for Rush.

This moves come as a continued effort by EA to influence gamers to purchase new copies of its games. “Mass Effect 2” and “The Saboteur” offered similar ploys and we can’t blame them, publishers and developers don’t see money from used game sales.

Look for our “Battlefield: Bad Company 2” review next week.