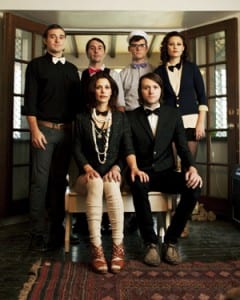 The dynamic of Los Angeles sextet Family of the Year seems ripe for a reality show — the six members, all in their 20s, share a house in the Happy Valley section of L.A. and are gearing up for the release of their debut LP, "Songbook," next Tuesday. The group is anchored by brothers Joseph (vocals/guitar) and Sebastian Keefe (drums/guitar).

But their lifestyle, as described by Sebastian in a recent interview with Blast, is less "Jersey Shore" and more typical family — hence the name. Originally called Bogie Ogreton, they decided to change the name at the suggestion of their friends, family and manager.

"(Family of the Year) was nice-sounding, and we kind of evolved into a family, the six of us," Keefe explained. "We all live together in the same house and we all travel together … so it was kind of fitting.

"It might have some kind of irony in it," he went on. "Often what seems to be a perfect family on the outside ends up being really bad on the inside. â€¦ We’re all very honest. We certainly aren’t ashamed of showing our feelings and … that we have problems."

Some of the internal conflict stems from sibling bickering courtesy of the Keefes, Sebastian admitted.

"We are both very opinionated people, so a lot of good comes out of that but there is a lot of disagreement," he acknowledged. "(But) we’re brothers, so we can disagree without as much consequences as other people. â€¦ We heat up quickly, but we also cool down quickly."

For "Songbook," Family of the Year is following the Radiohead "In Rainbows" model, making it available through their website for an optional donation, in addition to traditional outlets like iTunes and Amazon. 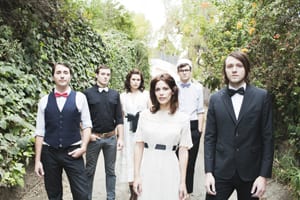 "We basically want people to have our music, is the number one priority," Keefe said. "It doesn’t matter how much money they give us."

Though Keefe cites among their primary influences The Beach Boys, The Beatles, Simon and Garfunkel, and Bob Dylan â€” all of which have a clear presence throughout "Songbook" â€” the members’ personal tastes are more varied.

"We listen to everything from Jay-Z to Fleetwood Mac," he said.

The co-ed vocals courtesy of Joseph Keefe and Vanessa Jeanne Long are evocative of 1970s harmonizers like CSNY and Fleetwood Mac, but the songs incorporate modern indie rock elements and structures as well. Their music has already attracted the attention of Keith Lockhart and Ben Folds, who arranged an opportunity for Family of the Year to play with the Boston Pops last October.

At their house, most nights are spent recording in their basement studio, according to Keefe, a routine that he said has sped up the songwriting process.

"Living together and having this camaraderie â€¦ plays a huge role," he said. "We’ve gotten quite good at just writing songs as a group. â€¦ We’ve been doing it so long that we can kind of churn them out."

Hailing from a musical Martha’s Vineyard family (their father is also a songwriter), Sebastian said it was inevitable that he and Joseph would begin writing music together.