A direct continuation of the first game, Bloodlines tells the story of Altair’s quest to end the Templar presence on the island of Cyprus. Though starting off shakily, the story progresses well because Altair’s character is surprisingly developed. While the game gives Maria, the female Templar, a significant role, not enough time is spent on developing their relationship. When combined with very thin mission set-ups, this omission contributes to the feel of a downsized game. 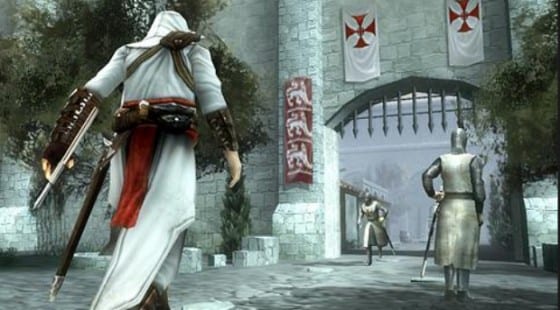 Story aside, the meat of an Assassin’s Creed game is running, climbing, and killing. Bloodlines gets the killing part right, but the few locations in the game are too small to truly show off the series’ signature free-running gameplay. Buildings are rarely more than a few stories tall, and even eagle viewpoints are  downsized. Furthermore, the fidgety camera makes running and long jumps an iffy prospect.

Such problems are compounded by the often-sticky controls. Unfortunately, this seems to be a direct holdover from the console versions. Altair gets frequently blocked while climbing and running by invisible obstacles.  By the time you’ve struggled to adjust his direction away from some mysterious block, his running has lost all momentum. 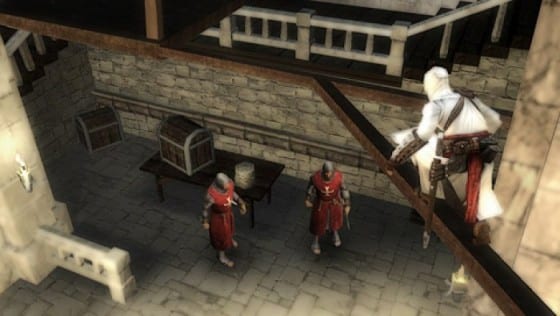 Air assassination's are still thrilling, even on the subway.

In addition, the locations are remarkably sparse when compared to the consoles. Aside from the lack of elevation, there just isn’t enough to do. Each map has barely a handful of side missions, with the focus clearly on the main storyline.

These missions, or the lack thereof, is where Bloodlines misses the boat. On a portable system, Altair’s exploits would have been a perfect fit for a wide array of bite-sized missions set at a rapid pace. Instead, players are left with precious little to do beyond move the story along.

Bloodlines’ presentation is remarkably well done. Although the island of Cyprus is rather bland, with simple stone structures, the character models and animation are very well done. Deserving of special notice, Altair’s voice acting is much improved. This time, Altair sounds like a local, giving him more personality. Even the music, sound effects, and other voices are worth noticing.

Happily, Assassin’s Creed’s combat actually translated perfectly. As before, combat is a waiting game, where Altair guards, and then counter attacks. The violence is still viscerally satisfying and Altair feels every bit the killer badass he was on the PS3.

Blast Factor: There were a lot of compromises made in bringing Assassin’s Creed to the PSP and not all of them were necessary. The visual downgrade and lessened scope are understandable, but the scarcity of missions is not. Despite an opportunity to improve them, the sketchy controls and camera are still issues. On the plus side, Bloodlines does a decent job expanding on Altair’s character in a meaningful way. Combat is engaging, and while the game is far from perfect, it is still worth a look for fans of cloaked assassins.

Assassin’s Creed: Bloodlines is available exclusively on the Playstation Portable, and retails for $39.99. A copy of this game was given to us by the publisher for review.