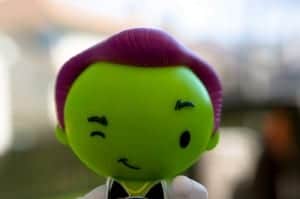 I’m sick of being winked at.

Not so much in person, but online. Almost on a daily basis, I’m winked at on adam4adam, a gay dating and hookup website. On there, winking is the equivalent of "poking" someone on Facebook except ten times worse. Instead of actually sending a message, users have the option to merely express an interest. Let me rephrase that — a sexual interest.

Recently, a user  named gloryhole333 "winked," "smiled," and then "unlocked" his pictures for me after I refused to respond. If John Keats or Jane Austen were alive today, I’m sure they would have never dreamed of Internet dating or the concept of "unlocking" pictures. They were too busy writing love letters to each other. I don’t think Jane Austen could have handled seeing gloryhole333’s twelve-inch penis. I know I couldn’t.

In the gay online dating world, communication has become increasingly limited to these technological forms of intimacy. Not all gay men live in metropolitan areas, and those who don’t are reduced to using such methods for conversation, sex or even a long term relationship. But there has to be a better way for gay men to communicate with one another than digital reach-arounds.

Websites like manhunt.net and adam4adam.com offer these extra features on their websites to help users connect with each other and find the perfect mate. But these digital forms of intimacy have hurt and not helped gay men establish bonds of intimacy with one another in the online dating community.

Of course gay men could use the for-pay dating website match.com where users are able to send email-type messages back and forth to one another for a nominal fee each month. But most gay men don’t have that kind of patience. They want instant feedback. They want an instant reassurance of their intentions. They want instant sex.

A poke or a wink can avoid a tiresome conversation. You know, one that might include what the man’s job is, where he went to school, or even his name. Many gay men who use adam4adam.com and manhunt.net on a daily basis view these technological forms of intimacy as simply a means to an end. And while the online dating world is not going away anytime soon, it is frightening how this form of communication is becoming more and more acceptable in the gay dating community.

But there are the few remaining romantics left out there who do send actual messages on adam4adam.com and manhunt.net. These messages usually consist of the following lines:

"Would love to fuck you right now!"

Have you found the perfect online dating site yet? Let us know in the comments section.