We know you love slaughtering masses of undead brain-hungry Nazi-Zombies, but just how far does your passion for these creatures of death reach?

Today Activision made that decision for you and released the Call of Duty: World at War Zombies App for iPhone/iPod Touch.

What is it? First off, “Zombies” is a full-on 3D-rendered game, located in the original zombie map "Nacht der Untoten" (Night of the Undead) that features both single player and frenzied multiplayer for up to four gamers to participate in. And the best part? It looks damn fine.

"This is a great opportunity for fans of Call of Duty: World at War to take the fight against the Zombie masses wherever they are," said Mark Lamia, Studio Head of Treyarch. "Zombies is a single player and co-op gameplay mode that people from all over the world have enjoyed playing and have spent countless hours conquering limitless waves of Zombies." 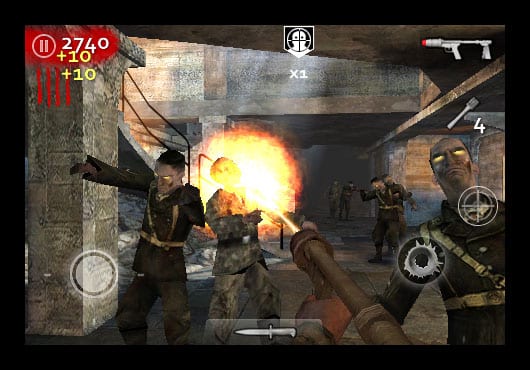 The App will you $9.99 and if you’re sold by these words alone, follow this link to start your download..like right now.