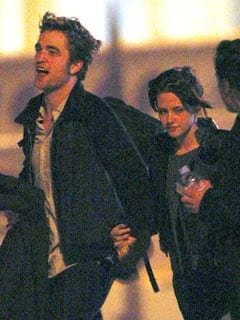 Robert Pattinson, Kristen Stewart, and Taylor Lautner arrived in Paris on Monday and checked into a luxurious hotel before going out for a late dinner where they met up with Fergie, People reported.

They did a press event on Tuesday and got ready to leave for the next stop on their European “New Moon” press tour.

But Robert and Kristen were among the last to leave.

“[Pattinson and Stewart] were the last ones to leave the terminal to board the plane,” one photographer on the scene told People. “Out on the tarmac, he took her hand, like young lovers. They stopped and looked at each other, their plane, the scene. They seemed very calm, in love. They continued holding hands boarding the plane.”