Swashbuckling pirate stories, when executed properly are great fun. They’re tales of fortune, misfortune, love, greed, lust, betrayal, and violence and altogether comprise epic fantasy worlds we love to escape to. From the Pirates of the Caribbean saga, to our nation’s “Talk like a Pirate Day”, these Arrr-speaking, sword-wielding fiends of the sea undeniably entertain us.

Telltale Games, makers of the Sam and Max and Wallace and Gromit series of point and click adventure games, released the fourth installment in their own pirate franchise Tales of Monkey Island with The Trial and Execution of Guybrush Threepwood last week, but don’t lose hope: the title is bleak, but the game is wonderful.

The Tales of Monkey Island series is an episode-based saga. The stories began in July with Launch of the Screaming Narwhaland today’s installment Trial and Execution is number four in a five-part drama, culminating next month with Rise of the Pirate God due out sometime in December. 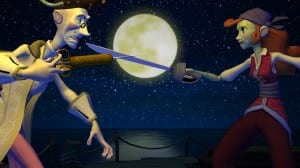 Another essential bit of preface is that Trial and Execution just like those before it, is a point-and-click action adventure game and is rooted on its magnificent storytelling and multitude of dialogue lines.

Trial and Execution begins with a detailed yet brief cinematic introduction that will remind past players of the last chapter’s events, and will catch up newcomer’s to just what the hell is going on. I found this inclusion very helpful, because with short games like these played a month prior, it’s easy to forget what you’ve already accomplished, or, as is more likely, the mess you’ve gotten into.

In the game you play as Guybrush Threepwood, mighty pirate, who, for as ambitious as he is, lacks restraint and a fully operable brain. This is not to say you’re guiding an empty-headed buffoon around the game-world, because you’re not, just that the comedic value of his bumbling nature is apparent.

The basic plot synopsis for this installment is, without giving too much away, you’ve returned to the once-friendly Flotsam Islands, only to be seized and tried in a court of pirate-law for high seas crimes you’ve allegedly committed. It’s your job to defend yourself, using your dashing wit, in the court and save yourself from an untimely death. Oh, and at the same time the sinister French Marquis is plotting, and he’s plotting hard. To live through the day, a lot is asked of Guybrush, but hell, he’s escaped the belly of a Leviathan, how hard can this be!? 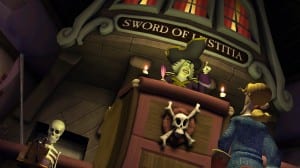 With four titles already under the thick belt of the Monkey Island series, there isn’t a heck of a lot to say here. The incredibly solid foundation Telltale laid in the preceding titles is applied to Trial and Execution with wonderful execution.

Voice-acting and character-recognition (through the voice acting), arguably the focal points of point and click games, are spot-on and without flaw in this latest game. With every line spoken, and there are many, many lines of dialogue, I became more attached to Guybrush and the entire supporting cast. Their lines aren’t corny; save for a few, and through this genuineness, the character’s truly come to life and become an emotional investment on you.

The story and dialogue are so good that it’s scary. The events unfold like a great storybook, and one you’ll find yourself steam-rolling through, as events transpire just like that (I snapped my fingers).

The lines of dialogue are eloquently crafted pieces of prose, and truly speak to the writing staff at Telltale. I’d really like to meet these guys and gals; they have some bona fide talent, that’s for sure.

The music element in Trial and Execution is again beautifully done. It intensifies tense moments, relieves stress at others, and is generally appropriate. I wouldn’t put it up for any soundtrack award, but it works, and it works very well.

As far as plot is concerned, I won’t give specifics, as the game lasts only about three hours, but I can say there is more going on in this tale than any of the others. Yes, the first was intriguing on account of its newness, but Trial and Execution is a rollercoaster ride of emotion that’ll keep you actively engaged right up until the stunning and unexpected conclusion. Alliances are formed, backs are stabbed, and hot peppers are licked! But best of all, this installment ends on the most slippery of cliffhangers and I am truly excited to play next month’s fifth and final episode. 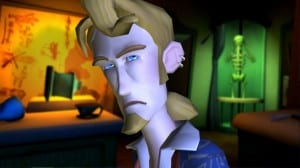 What I found most compelling about the game was the fact that a main character dies. It’s a tense moment in a light-hearted franchise. It was wholly unexpected, but masterfully executed. Death was shown in previous games, but only at a comedic and light level. This tragic occurrence is just that; tragic, and for me, was a compelling reason to finish the game. I had to know what’s next!

My only gripe with the game was its return to a familiar location instead of branching out to new environments, a la the belly of a leviathan in the previous installment, because there I feel Telltale strutted their digital stuff and as a result wowed fans and I alike. Now, the game introduces some new environments; the courthouse, De Singe’s laboratory, and brings the darkness of night to the world, which elicits a second opinion of a locale you thought you knew, but still, I think Telltale could have and should have done more.

The game’s humor is also worth noting. Unlike the comedic value of another Telltale property, Sam and Max, which is more direct, the jokes in Trial and Execution are light-hearted and for lack of better term, less funny, but still funny. You won’t be laughing the way you do during your favorite comedy film, but you’ll have a giddy little smirk fixed on your face during much of the game.

Aesthetically, the title looks wonderful. I have a decent PC, a laptop no less! PC gamers go ahead and heckle me, but the game runs smoothly and looks gorgeous on my rig (if I can even call it that).

From the expansive jungle to the detailed docks to the uncivilized courtroom, Telltale’s attention to detail yet again shines through a fog of drear often associated with games of this nature. I experienced no slow-down or texture issues throughout my stay at the Flotsam Islands and at times stopped and reveled at the beauty of creation, as some of the environments really look splendiferous.

Blast Factor: Tales of Monkey Island: The Trial and Execution of Guybrush Threepwood is a wonderfully thought out, executed, and enjoyable point and click adventure. Excellence in story-telling through voice acting, attention to detail in regards to the game’s environment and memorable characters combine to make this one of the best installments. Telltale Games have proven they have the chops to excel in the genre and I am both excited and saddened to know there is but one game left!

Tales of Monkey Island: The Trial and Execution of Guybrush Threepwood is available today on PC. $34.95 gets you all five episodes. A copy of the game was given to us by Telltale for reviewing purposes. Arrrrrr.