SAN DIEGO — This year’s Comic-Con International Preview Night included the exclusive screening of “The Vampire Diaries” which is scheduled to air on The CW Thursday nights at 8 p.m. starting September 10. It also marks the return of Kevin Williamson, whose “Dawson Creek” redefined drama for young adults in the 90s.

Despite a similar premise to “Twilight” about forbidden love and vampires, there isn’t too much “The Vampire Diaries” shares with it. The show is based on a series of young adult novels by LJ Smith, and while the show isn’t 100 percent true to the books, the literary fans will find that the spirit of the story remains intact and the transition to the television medium works well.

The pilot starts with an atmosphere of urgency. It’s classic Williamson with an isolated stretch of road, a couple and swift violence. Williamson grabs the audience’s attention immediately without being overindulgent.

As the stage is set with a “monster” on the loose we are introduced to Elena Gilbert (up-and-comer Nina Dobrev), a girl whose sudden loss of her parents leaves her life in chaos. Meanwhile, making matters worse is her younger brother, Jeremy, whose self-destructive behavior doesn’t help matters. 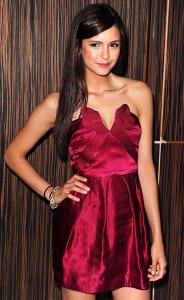 Elena meets the new guy in school, Stefan Salvatore (Paul Welsey) whose mesmerizing abilities prove he is not just another high school student. He is in fact, a vampire.

Just when it appears Stefan and Elena are getting closer, another attack takes place. From here, the story picks up at an exciting pace. Stefan is greeted by his brother, Damon (a charismatic Ian Somerhalder). It is clear with the first deadlock stare they share a rocky history. As Damon taunts Stephan by staking a claim on Elena, the brothers begin what is one of the best moments of the episode. The set up for the fight, the witty dialogue and the context of their relationship makes this a worthwhile storyline.

Overall, the pilot for “The Vampire Diaries” is a great start for the series. Audiences will love the hints of humor thrown into the mix of drama, Sommerhalder’s delicious bad boy taunts and the formulaic love story. Dobrev and Wesley are refreshing as their chemistry onscreen intensifies with each added scene. The only stark contrast is the narration of the diary entries which comes across as awkward at times. The atmosphere for the series is balanced, and the collaboration between talent and production are not over the top. There is a focus on keeping up the suspense until the final scenes.

“The Vampire Diaries” drew several cheers even from fans who were skeptical about a “Twilight” reboot. Each scene element demonstrates why this will certainly be the perfect show to take over the coveted slot formerly belonging to “Smallville”. If attendees for Comic-Con get a chance, for the Saturday showing of “The Vampire Diaries”? It’s worth the watch!