NEW YORK — The‚ Tuesday night Bowery Ballroom crowd‚ that witnessed a sweaty, high-energy performance by Lights Resolve probably had no idea that the band had just driven 19 hours to make it to New York from a tour stop in the Midwest to conduct an interview with Matt Pinfield on WRXP. 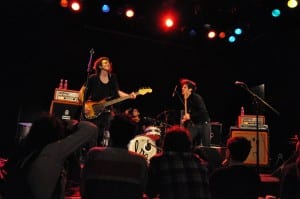 Lights Resolve (Sarah Be for Blast)

Despite a lack of sleep, and a tough act to follow in Brooklyn’s Care Bears on Fire, the New York City alt‚ trio jumped at the opportunity to be a last-minute addition to the opening night of the 2009 CMJ Music Marathon.

“We’re often running on empty but that’s when we tend to do our best,” said singer Matt Reich, during a chat with Blast after his band’s set. “The more we get beaten down, the more we rise to the occasion.”

Reich and drummer Neal Saini met as high school students in Long‚ Island and have been playing music together for 11 years, they explained. Bassist Luke Daniels, who had been trying to elbow his way into Lights Resolve for years,‚ was added after their original bassist left to join Australian sister act The Veronicas — in spite of a less than stellar audition that Reich still laughs about to this day.

Drawing upon influences including U2, Sigur Ros‚ and The Who, Lights Resolve has toured with the likes of Shiny Toy Guns, Dashboard Confessional and Panic! At the Disco.

Liz Raftery of the Blast staff contributed to this report.