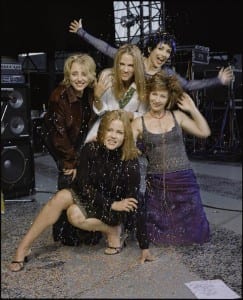 There aren’t many people who can reference, with utter sincerity, “the good thing that came out of falling off a cliff.” Jane Wiedlin, the pixie-ish guitarist for New Wave chart-toppers The Go-Go’s, is one of them.

The silver lining she’s referring to is the fact that last year, a knee injury she suffered after, yes, literally falling off of a cliff while hiking forced the cancellation of what was supposed to be a farewell tour for the band.

A year later, the tour has been rescheduled — and rechristened. The farewell theme has been nixed. Instead, the “Ladies Gone Wild” tour, which kicked off May 27 in Las Vegas, is in celebration of the 30th anniversary of The Go-Go’s chart-topping debut record, “Beauty and the Beat.” To coincide with the outing, special editions of the album (which spawned the hits “Our Lips Are Sealed” and “We Got the Beat”) were released in May, including a hot pink vinyl version. In August, the band will receive a star on the Hollywood Walk of Fame.

“(After) taking a year off, when we re-launched the tour, we decided … we’re really not sure that it’s a farewell tour,” Wiedlin told Blast. “Having time to think about it, we decided we didn’t want to be so finite in our plans. It’s best to leave an open door when it comes to The Go-Go’s, because things come up that we want to do, and projects that we’d like to do together. So it just seemed better not to break up yet.”

Meaning that The Go-Go’s won’t become part of the club of artists who embark on a series of seemingly endless “farewell” tours?

“I really don’t want to be one of those bands,” Wiedlin says emphatically, emitting a girlish cackle. “That’s not me as a person. I try and do what I say and say what I mean, and I think that it’s a good policy for the band as well.”

When Wiedlin chatted with Blast in April from her home in Los Angeles, she and drummer Gina Schock, who are neighbors, were planning to start rehearsals the next day (“rocking out in my basement,” as she described it). Wiedlin, for one, spoke with the infectious exuberance of someone looking forward to a summer road trip with her best girlfriends. Fans can expect to hear the band’s biggest hits, as well as some cover songs and potentially even some new material, she said.

“Thirty years ago, if you had told me we would be doing (this anniversary tour) today, I would have laughed in your face,” she admitted. “It just seems incredible that we’re still together and that people still want to see us and people still love those songs. It’s very flattering and heartening to know.”

“I love the record still,” she added. “I think the songs hold up after all those years, and although the sound quality sounds kind of silly to me in retrospect, I think that the actual songwriting is still strong, and the way the songs sound live is very strong.”

Formed in Los Angeles in 1978, The GoGo’s have sold more than 7 million albums to date, and hits like “Our Lips Are Sealed” and “Vacation” are still radio staples. Though this run is sometimes mischaracterized as a “reunion” tour, in fact, the band has been “reunited” for more than 20 years, Wiedlin pointed out.

“Even though we don’t do The Go-Go’s 24/7 anymore, we still consider ourselves to have been back together since the fall of 1990,” she explained. “I think we’ve played every year since 1994 except for last year. … We just don’t play year-round.”

But to say that this tour will be a bit tamer for the ladies, all of whom are now in their 50s, than the dates in their heyday would be an understatement. The members have spoken openly about their hard-partying lifestyles back in the day.

“Unfortunately, we’re getting older and it’s harder on the body,” Wiedlin said. “But mentally, once we go over the songs a few times, most of them just come right back right to your brain, because we’ve been doing them for so many years.”

“For sure there’s gonna be a whole lot less partying going on, because three of The Go-Go’s are completely sober, and two of us are not literally sober, but a lot calmer than we were 30 years ago,” she said, laughing. “Probably slightly more dignified but not a lot, because basically we’re all a bunch of clowns at heart. So we will still be goofy. … The thing about The Go-Go’s is, of course, it is a business, but it’s also super fun and it doesn’t take drugs and alcohol and cigarettes to make it fun.”

It’s easy to cynically write off bands from decades past trotting out their classics on tour every few years as mere money-making schemes, but one gets the sense that for The Go-Go’s, it’s more than that. What’s perhaps most remarkable is that the quintet — Wiedlin, Schock, singer Belinda Carlisle, bassist Kathy Valentine and guitarist Charlotte Caffey — have all managed to stay friends through the years.

“It’s the longest relationship any of us have ever been in,” Wiedlin noted. “We definitely have our ups and downs, just like any relationship, but the bottom line is, when the five of us come together and we play music, it’s something magical that we feel, and obviously other people feel it too, because they come and see us play. That’s the only way I can explain it. It makes all the sort of bad times worth it, because it’s so great and fun when we get to play together.”

“I think as you get older, it’s natural to become more introspective,” she added. “And certainly knowing that it’s the 30-year anniversary of our groundbreaking record definitely makes all of us think about it more. There’s a lot of acknowledgement going on between the five band members as well. A lot of like, ‘I love you. I’m so happy we’re doing this.’ There’s a lot of sentiment going on. I don’t know if it’s the 30-year thing, or if it’s just that we’re getting older, but that’s the state of affairs in Go-Go land.”

The Go-Go’s, who let their instruments speak for themselves rather than relying on elaborate costumes and stage sets, stand in sharp contrast to the most notable modern female icons — i.e. hyper-sexualized artists like Katy Perry and Lady Gaga. While expressing admiration for the fact that Perry and Lady Gaga both write their own material, Wiedlin said she’s surprised there aren’t more all-female rock bands around today.

“When (we found success) 30 years ago, I thought it would just bust the doors wide open and you would see just as many girl musicians as you would guys,” she reflected. “But it hasn’t really happened that way. I mean, it’s changing a little bit obviously, but I mean, I don’t really know of any, like, girl bands. Everyone gets on my case when I say that, because of course there are some. … I just think it’s weird that it hasn’t changed more.”

Aside from smashing barriers, one would be hard-pressed to find evidence that The Go-Go’s have even gotten the recognition they deserve in breaking into the boys’ club of rock ‘n’ roll, despite their place in history as the first all-female group who wrote their own songs and played their own instruments to have a #1 album.

“We don’t really seem to get a lot of acknowledgement or credit for that … and it is a fact,” Wiedlin said. “I feel like a jerk even bringing it up, but I guess somebody has to.”

Case in point? The band was inexplicably left out of the Rock and Roll Hall of Fame’s recent “Women in Rock” exhibit, which opened in May.

“It’s just kind of baffling,” Wiedlin said. “Because we love the Rock ‘n’ Roll Hall of Fame and we would love to be in that exhibit.” (Representatives from The Rock Hall have said the organization tried to get in touch with the band and was unable to.)

“I’ll say (what) I said 30 years ago and I believe it’s still true,” she added — and there’s that cackle again. “The Go-Go’s are like Twinkies. Everyone loves them, but nobody wants to admit it.”

The guitarist, who admits she lives in “a bubble” when it comes to new music (“I’ll hear a song that came out in the early ‘90s and be like, “Oh, this is great. What’s this new artist?” Or it’ll be The Strokes or The Killers or The White Stripes or something. I’m really behind. I’m ashamed to admit it.”), nonetheless remarked about how much the industry has changed since The Go-Go’s got their start.

“The (current) music business is much harder,” she said. “It’s gotten bigger and smaller at the same time, because it’s much harder to be a successful musician, but there sure are a lot more bands and musicians out there. But I don’t see that anyone’s really making money. I mean, it seems like there’s like four people making money.”

“They seem to have to work so hard,” she went on. “I remember back in the day when we were popular, I felt like we were working every second of the day. But nowadays, people seem to do so much more. … Everything is just so much bigger now, and I don’t think I know how they do it. It looks exhausting.”

Just before we hang up, Wiedlin interrupts me for one final endearing add-on.

“Feel free to edit me if I sound like an idiot. I just don’t want to come off as, like, this bitter old lady or anything, ‘cause I’m not,” she said (which is pretty funny, because with her distinctive high-pitched voice, I don’t think Wiedlin could sound bitter, or old, if she tried). “I’m really happy and grateful for everything.”

Coming from someone who can find the bright side of falling off a cliff, it’s impossible not to believe her.

The Go-Go’s are scheduled to play the Bank of America Pavilion on June 9, with the B-52s. For complete tour dates, visit www.gogos.com.