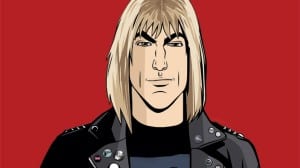 Lazlow, the hilarious and dirty-mouthed DJ, has produced the music-scene in GTA games since GTA: III in 2001, and from Rockstar’s 6-word announcement this morning, we know he’ll be in GTA IV “Ballad of Gay Tony” but we don’t know in what capacity. One thing’s for sure though, if his previous work is any indication, it’ll be pure sonorous enjoyment!