Do you have extra cash in your wallet and serious first-person shooter ambitions? If so, Microsoft today announced exclusive and limited edition Modern Warfare 2 and Halo 3: ODST bundles, packed full of goodies, and armed and ready to release alongside their corresponding game.

Revealed last night in Hollywood at a Modern Warfare 2 press event, the Modern Warfare 2 bundle includes a custom designed console, 250 GB hard drive, two wireless controllers and a standard edition copy of Modern Warfare 2 for US $399.99. And, the systems are already available for pre-order.

A hard drive is enough to get us excited, but it seems like Microsoft is finally putting a value-oriented bundle out there.

On the Halo side of things, Microsoft revealed the ODST bundle, complete with a copy of both Halo 3 and ODST, a 120GB Elite Xbox 360, a wireless controller (not the limited ODST one though), and access to the Halo: Reach multiplayer beta. For now however, the system bundle has only been announced for PAL territories, with prices ranging from 280 Euros in continental Europe ($410) to 4,228 Rand in South Africa ($574). But as always, stayed with Blast for our continued coverage. 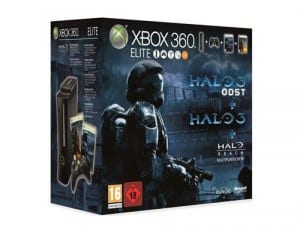