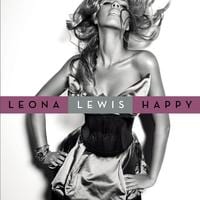 British songstress Leona Lewis has every reason to be “Happy.” The latest single from the winner of Britain’s X Factor is a powerful follow-up to her 2008 triple Grammy nominated album. Like her debut single “Bleeding Love,” “Happy” is available September 15 on iTunes. It’s a ballad that showcases Lewis’ strong set of pipes.

Co-written by Lewis, Ryan Tedder of One Republic and Evan Bogart, “Happy” is sure to be another hit for Lewis. A tune about going after happiness no matter the cost, Lewis belts out the notes with ease. It’s the type of song that will sound brilliant live, so hopefully it’s on the set-list when Lewis performs at Divas Live! on VH1.

“Echo” the sophomore album from Lewis, co-produced by Simon Cowell and Clive Davis, is available November 17.