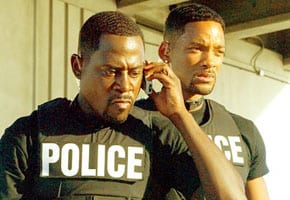 Martin Lawrence and Will Smith as the Bad Boys

As much as we all love the new, serious roles he’s has taken on, there’s just nothing like action hero Will. He’ll be back soon, along with Martin Lawrence, as Columbia Pictures begins work on “Bad Boys 3.” The big screen hasn’t seen the likes of Mike Lowry and Marcus Burnett since 2003. According to The Hollywood Reporter, Michael Bay will be directing and Petere Craig (think “Cowboy Bebop”) will be writing. And, Reuters reported, Jerry Bruckheimer is the desired producer. While no deals have been made, Smith, Martin, Bay and Bruckheimer have all shown interest in bringing “Bad Boys” back.

In other action flick news, “Rambo 5” is also in the making. Variety reported that Sylvester Stallone and Nu Image enjoyed “Rambo 4” so much, that they’re ready to do it again. This time, Rambo will be defending us from bad guys on the U.S.-Mexico border. Rumor also has it that Stallone may be directing and that filming will begin in the spring of 2010.